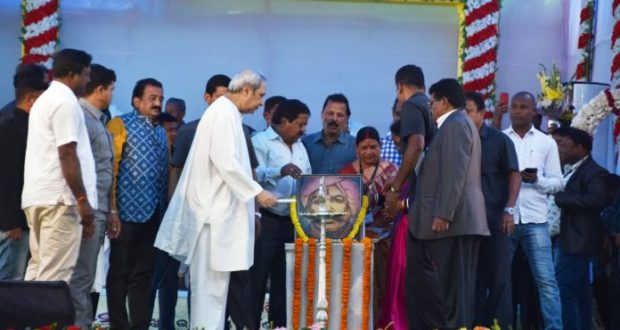 Jharsuguda:22/12/18 :Chief Minister Naveen Patnaik laid foundation stones and inaugurated a slew of developmental projects during his visit to Jharsuguda on Friday.

Addressing a meeting of Gond Maha Sabha organsied by Gondwana Gond Samaj here, the Chief Minister declared Rs 50 lakh for construction of Saheed Karunakar Singh Naik’s memorial and also assured that measures would be taken for conservation of Kolabira Fort.

The Chief Minister also assured the gathering that commemorative service in honour of the martyr will be observed across the state.

“Saheed Naik’s sacrifices towards independence is a historical chapter,” he said.

Naveen said the state government has been giving importance to the education of SC and ST children, which is the only way to ensure development. More than six lakh students have been staying at different hostels of state and pursing their studies, he added.

The Chief Minister also inaugurated six developmental projects worth of Rs 11.81 crore at Kolabira and laid the foundation stones of 14 projects worth Rs 450 crore.

Elaborate security arrangements were made and 12 platoons of police forces deployed at the venue for the Chief Minister’s visit.

2018-12-22
Editor in chief
Previous: Executive Director, IPICOL attended the demonstration of different CRM applications
Next: Decisions taken by the GST Council in the 31st meeting held regarding GST rate on services