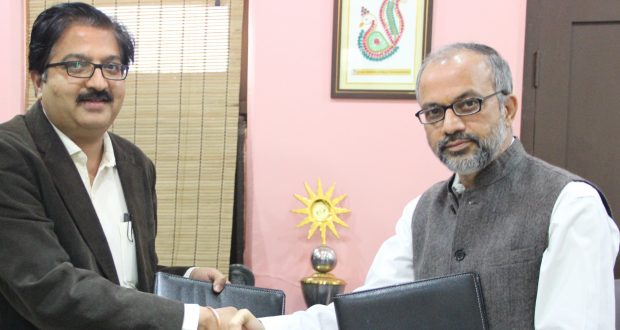 in Entertainment December 20, 2018 Comments Off on NFAI and FTII sign MoU for transfer of land for construction of film storage facility 833 Views

Pune:20/12/18:National Film Archive of India (NFAI) and Film & Television Institute of India (FTII) today signed Memorandum of Understanding (MoU) for transfer of three acres of land for the construction of storage facility for films and film material. The land belonging to FTII at their Kothrud campus in Pune will be transferred to NFAI for this purpose. Shri Bhupendra Kanthola, Director FTII and Shri Prakash Magdum, Director NFAI signed the MoU today.

“For decades now NFAI has been doing remarkable national service by conserving India’s cinematic legacy. Any contribution in this direction can never be enough. FTII is pleased to offer its might to this gigantic effort.” said Shri Bhupendra Kanthola, Director FTII.

Shri Prakash Magdum, said “We thank FTII for joining hands with NFAI in this cause of film preservation. Due to increased efforts of NFAI, there has been steady inflow of celluloid films for preservation in last three-four years. This has resulted in the storage capacity of NFAI almost becoming full. Therefore, there is a need to construct new storage facility.”