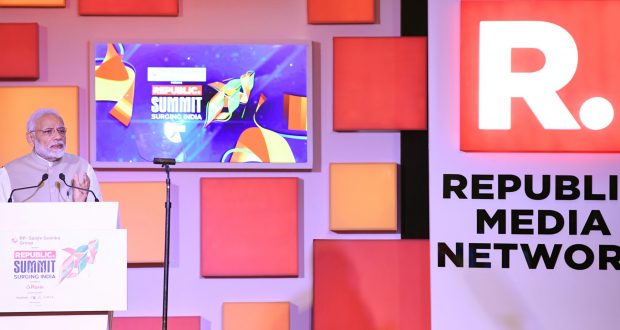 in Entertainment December 19, 2018 Comments Off on PM addresses addressed the Republic TV Summit in Mumbai 744 Views

He condoled the loss of lives in the Hospital fire incident in Mumbai yesterday.

He emphasized the importance of positive news for a vibrant and prosperous nation. He said that India needs to scale great heights in multiple spheres such as science, innovation, and sports etc. In the same vein, he mentioned media as well.

The Prime Minister said that the words “Surging India” represent the spirit of 130 crore Indians.

He said that a few years ago, it was difficult to imagine India surging towards becoming a five trillion dollar economy, and rising up the ranks in the ease of doing business. He gave examples to illustrate how, today, those involved in criminal activities are being apprehended and brought to justice. He gave examples from sanitation to tax base, to show the transformation over four years. He said the Union Government is moving forward through Policy Driven Governance and Predictable Transparent Policies. He referred to the rapid pace of infrastructure development. He referred to the monthly PRAGATI meetings which he chairs to review progress of projects. He said projects worth 12 lakh crore rupees have been speeded up in this way.

The Prime Minister emphasized that laws and Acts have to be followed up by action. In this context, he mentioned the Insolvency and Bankruptcy Code.

He said that national interest now guides India’s foreign policy. And India’s voice is being heard in international fora.

Shri Narendra Modi indicated that the 28% slab of GST would soon, only be restricted to a few select items, such as luxury goods. The Prime Minister said that the effort will be to ensure that 99% of all items, including almost all items used by the common man, would be kept at a GST slab of 18% or less.

2018-12-19
Editor in chief
Previous: PM releases the book “Timeless Laxman”
Next: BMC signed a MOU to put in place a sustainable Plastic Waste Management system in the capital city