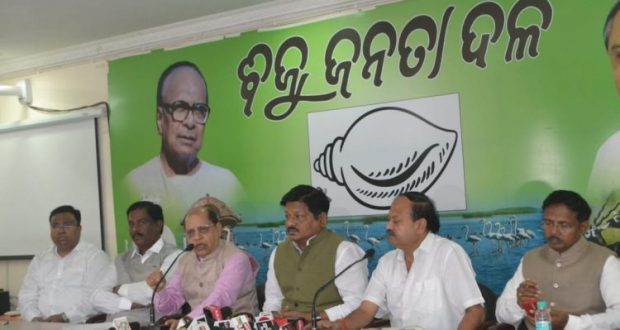 in Politics December 17, 2018 Comments Off on BJD will stage a demonstration before the Parliament demanding hike in the Minimum Support Price of paddy 709 Views

Bhubaneswar: 17/12/18:Odisha’s ruling Biju Janata Dal (BJD) will stage a demonstration before the Parliament in New Delhi on January 8 demanding hike in the Minimum Support Price (MSP) of paddy.

Acharya informed that all the BJD MPs, MLAs, Zilla Parishad members, and party workers will march to New Delhi boarding a special train on January 6 to press for the long-standing demand for Odisha’s farmers.

The party’s senior leaders alleged that the Centre has betrayed the farmers of Odisha with the false assurance to increase the MSP of paddy. Besides, the Prime Minister had no time to discuss the issue with the members of the all-party House Committee of the State Assembly.

“We will urge the Centre to hike the paddy MSP in accordance with the recommendation of the Swaminathan Committee and Rs 2,930 MSP (minimum support price) for paddy per quintal to each farmer of Odisha,” they said.

They also alleged that the BJP-ruled States are receiving assistance during natural calamity but, the Centre is showing a step-motherly attitude towards Odisha in the time of need.