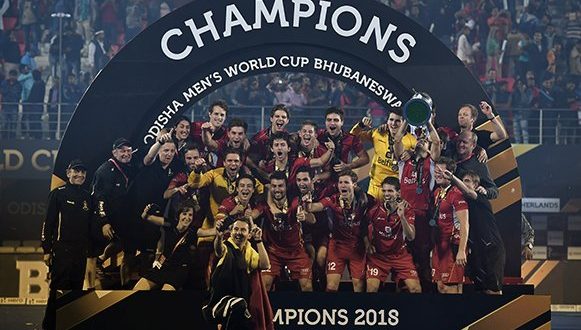 Bhubaneswar, India:16/12/18: Belgium have claimed their first ever World Cup title thanks to a dramatic shoot-out victory over the Netherlands in the final of the Odisha Hockey Men’s World Cup Bhubaneswar 2018.

It proved to be third time lucky for the Red Lions, who finished runners up at both the Rio 2016 Olympic Games and the EuroHockey Championships in 2017. Goalkeeper Vincent Vanasch excelled in the shoot-out, making numerous key saves to help his side became the first Belgium side in any team sport to win a world title.

As well as winning the iconic trophy for the first time in their history, it has been confirmed that Belgium, coached by New Zealander Shane McLeod, have moved into first position in the FIH Hero World Rankings. To see the complete rankings, click here. 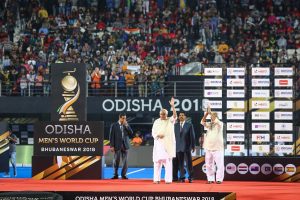 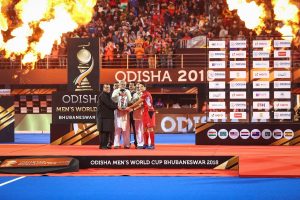 The bronze medal was taken by Australia, who recovered from their semi-final loss at the hands of the Netherlands on Saturday to storm to a sensational 8-1 victory over England. Tom Craig scored a hat-trick in the contest to earn the Odisha Player of the Match Award.

The medal matches brought the curtain down on a thrilling two and a half weeks of sensational hockey at the 15,000 capacity Kalinga Stadium, the stunning venue that has welcomed mammoth crowds on a daily basis throughout this wonderful event. Belgium defender Arthur Van Doren was named as the Odisha Best Player of the event, being presented his award by Indian cricket legend Sachin Tendulkar. Dutch duo Pirmin Blaak and Thijs van Dam were also winners of individual awards, being named Odisha Mining Corporation Best Goalkeeper and Hockey India Best Junior Player respectively, while the Hero Top Scorer Award was shared by Australia’s Blake Govers and Alexander Hendrickx of Belgium, who scored seven goals apiece. 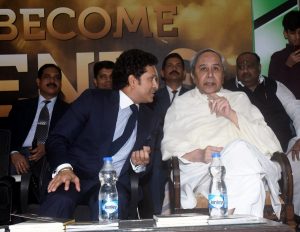 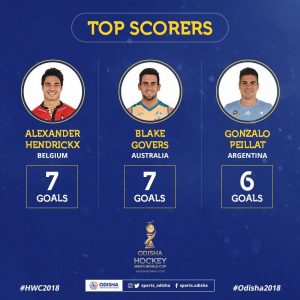 The gold medal match, witnessed by a sell-out crowd at the Kalinga Stadium, was packed full of drama as two evenly-matched teams set about the task of claiming the world title. The Netherlands were chasing a fourth World Cup success to draw level with Pakistan as the team with the most title wins, while Olympic silver medallists Belgium – a side beaten by the Dutch in the final of the EuroHockey Championships 2017 in Amsterdam – were determined to claim their first major crown to cap what has been a remarkable rise over the past ten years.

The two finalists went hard at each other in the opening stages of the match, with chances being created at both ends. Jeroen Hertzberger forced an early save from Belgium shot-stopper Vincent Vanasch, while Simon Gougnard’s speculative, high backhand strike was almost brilliantly turned into the Dutch goal by Tom Boon.

The play switched from one end of the field to the other throughout the second quarter, with Netherlands defender Glenn Schuurman making a crucial interception to deny Florent Van Aubel a clear scoring opportunity with Arthur de Sloover doing the same in the Belgian back-line. The Netherlands had two penalty corner opportunities ahead of half time, but failed to take their chance as the Red Lions defence held firm.

The two sides remained locked together throughout the third quarter, although Belgian captain Thomas Briels forced a save from Pirmin Blaak while Mirco Pruijser flashed a backhand effort across the face of the Belgian goal. It was a tense and cagey period, although the same could not be said for the fourth quarter as both teams desperately tried to get the win before the lottery of the shoot-out would be brought into play. Netherlands ace Bob de Voogd rattled the pads of Vanasch, while Nicolas de Kerpel hit the side of the goal just before Briels almost won it for Belgium, with Sander Baart making a crucial goal-line clearance to take the match into a shoot-out. 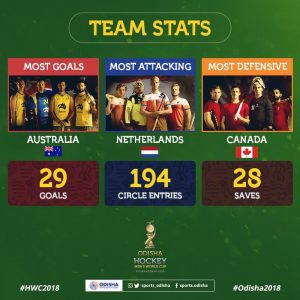 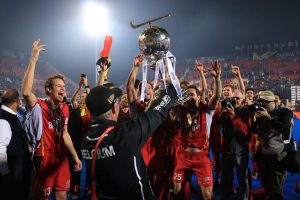 The Dutch took a 2-0 lead in the shoot-out thanks to strikes from Jeroen Hertzberger and Jonas de Geus, but goals from Florent Van Aubel and Victor Wegnez, combined with some brilliant saves from Vanasch, restored parity at 2-2. When Thijs van Dam missed, Arthur de Sloover thought he had won the title for Belgium when he fired home, but his effort was ruled out by a smart video referral from the Netherlands.

However, Belgium did not have long to wait for their moment in the sun. When Florent Van Aubel scored in sudden-death, Jeroen Hertzberger needed to find the net to keep his team alive. However, it was not to be, with Vanasch forcing the brilliant Dutch attacker wide before his shot sailed over the cross-bar. Whilst it was heartbreak for the Netherlands, who had suffered defeat in a second successive World Cup final, the triumph for the Red Lions will be forever remembered as one of the greatest moments the history of Belgian team sport.

Speaking after the match, Odisha Player of the Tournament Arthur Van Doren said: “I couldn’t be more proud. We are world champions. We showed today that our best player is the team. What a team performance again! We showed against Germany, England and again today. It was a really close game. We knew that. Holland is a really great side, they showed it throughout the tournament. I could not be more proud of this team. We’re world champions and we deserve it. To be really honest, I think the team should get the Best Player award. We showed that team performance was key today. I could not be more proud of a number of individuals. Simon Gougnard showed that he can perform with all the circumstances. We dedicated this Final, and also the semi-final, to him and his family. The character that Van Aubel and Vanasch showed to take the shoot-outs after we thought it was over already. Every game, every moment, there were different players stepping up. That’s why the team is the best player.””

The game was an extra special occasion for Australian umpire Adam Kearns, who reached the milestone of officiating his 100th international match in the World Cup final. Kearns was presented with his Golden Whistle in recognition of his achievement after the match from Dr Narinder Dhruv Batra, President of the International Hockey Federation (FIH).

Earlier in the day, the bronze medal was claimed by Australia, who blew England away with a sensational performance to emerge 8-1 winners. The Kookaburras had emerged 3-0 winners when the two sides met in very close Pool B encounter earlier in the competition, but the meeting between the two losing semi-finalists was far more comprehensive, with the outgoing world champions ending their competition on a high.

Australia were at their devastating best from start to finish in the contest, showing that they had very much put Saturday’s agonising semi-final shoot-out loss against the Netherlands behind them. Blake Govers continued his brilliant form in Bhubaneswar with a stunning backhand strike midway through the first quarter, with Tom Craig doubling the lead a minute later after some excellent build-up play from exciting youngster Tim Brand. Craig claimed his second goal of the game in the second quarter, guiding a Govers pass into an empty goal after a flowing move ripped England’s defence wide open. 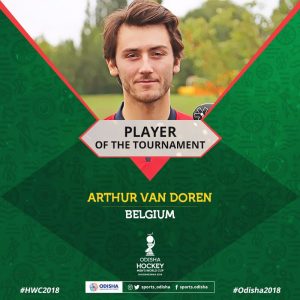 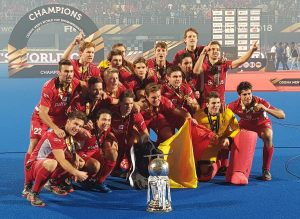 The Kookaburras put the result beyond all doubt in the third quarter, scoring three goals in three minutes to take the score to 6-0. Trent Mitton slammed a penalty corner rebound into the net, with Tim Brand firing in seconds before Craig – later named Odisha Player of the Match – completed his hat-trick with a cool finish under the arm of onrushing England goalkeeper Harry Gibson.

The tireless Barry Middleton scored for England at the end of the third quarter, but it was Australia who were to have the final say, with Jeremy Hayward sending two unstoppable penalty corners into the England net to complete an emphatic 8-1 score-line. While Australia claimed their tenth medal in men’s World Cup competition (three gold, two silver, five bronze), defeat for England resulted in a third consecutive fourth place finish in this pinnacle competition.

Speaking after his team’s bronze medal success, Australia’s Tom Craig said: “It feels good to be bronze medallists. The disappointment last night, we were insistent that we would not carry it into this game and I think none of us did that. We looked at each other in the eyes before the game and we said we’ve got your back and we did. I think we produced a performance we can be proud of. We wanted to continue to get better with every game. We did not want to take any backward steps, and I think we did that. We continued to improve. The Dutch game was a step up, was a fantastic game of hockey. That’s what hockey is all about. Good, fast, entertaining game. The fans loved it, people at home loved it. It was brilliant. We’re happy with our tournament.”

Information regarding the classification ranking process can be found in Appendix 2, Article 4 of the Tournament Regulations which are available by clicking here.