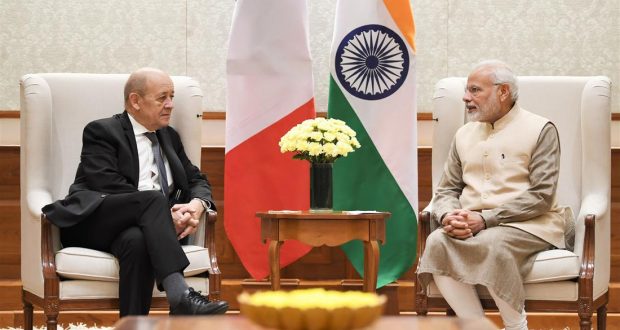 French Minister for Europe and Foreign Affairs calls on PM

in International December 15, 2018 Comments Off on French Minister for Europe and Foreign Affairs calls on PM 593 Views

The Prime Minister conveyed his heartfelt condolences for the victims of the recent terrorist attack in Strasbourg in France, and said that India stands with France in the fight against terrorism.

The Prime Minister warmly recalled the State Visit of President Macron to India in March 2018, as well as their recent interaction on the sidelines of the G-20 Summit in Argentina.

Mr. Le Drian briefed the Prime Minister on recent developments in the bilateral relationship, and French perspective on regional and global issues. The Prime Minister welcomed the strengthening of bilateral ties in all spheres, including defence, space, counter-terrorism, maritime security, and civil nuclear cooperation.