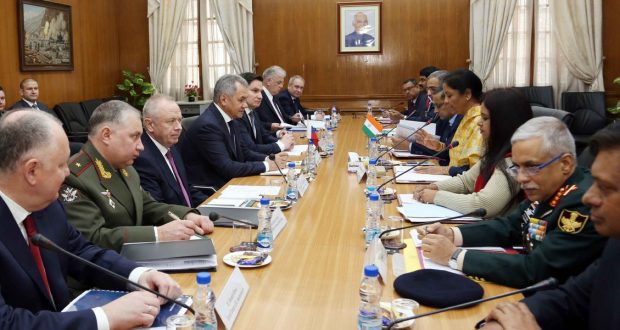 In the framework of the bilateral Special and Privileged Strategic Partnership, the IRIGC-MTC meeting discussed a wide range of issues relating to defence equipment, industry and technological engagement between India and Russia as well as after sales support/upgradation of military equipment of Russian origin. The Ministers expressed satisfaction at the dynamism and progress in bilateral defence cooperation. Intensive discussions were held on joint manufacturing projects, including the Kamov-226Thelicopters, naval frigates and projects related to land systems. The two sides also agreed to take forward inter-governmental arrangements for facilitating joint manufacturing of spares for Russian origin equipment in India, under the ‘Make in India’ initiative.

With a view to enhancing military-to-military engagement and rationalising the functioning of the Commission, a revised Inter-Governmental Agreement on restructuring the existing IRIGC-MTC to the IRIGC on Military and Military Technical Cooperation was also signed by the two Ministers. An additional institutional Working Group headed by Chief of Integrated Defence Staff to the Chairman COSE (CISC) and Deputy Chief of the Main Operational Directorate of General Staff of Armed Forces of Russian Federation would be set up under the expanded Commission.

The Ministers expressed satisfaction progress in structured engagement between their armed forces, including joint exercises, resumption of training exchanges and other interactions in the framework of the Bilateral Road Map on Defence Cooperation signed in June 2017.

The inaugural meeting of the IRIGC-MTC is proposed to be held in Russia in 2019 on mutually convenient dates.