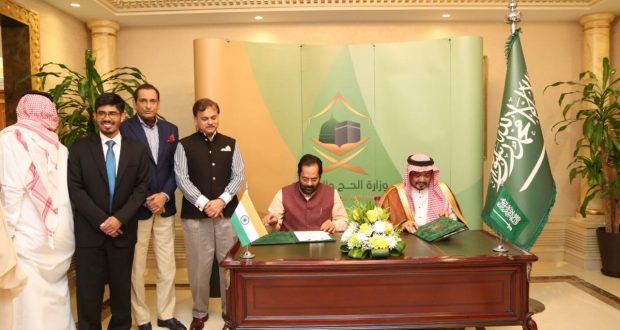 in International December 13, 2018 Comments Off on Bilateral Annual Haj 2019 Agreement between India and Saudi Arabia Signed at Jeddah 554 Views

Shri Naqvi said that the Saudi Arabia Government has always played active and effective role to ensure safety and better facilities to Indian Haj pilgrims. It is a part of strengthened bilateral relations of the two countries. He said that India-Saudi Arabia relations have achieved newer heights under the leadership and guidance of Saudi Arabia King Salman Bin Abdul Aziz and Prime Minister of India Shri Narendra Modi. Both the countries share strong cultural, historical, economic and political relations.

Shri Naqvi thanked The Custodian of the two Holy Mosques, King Salman Bin Abdul Aziz for his guidance and active support to make Haj 2018 , successful. He said that the Government of India, in coordination and cooperation with Saudi Arabia Government, Indian Consulate and various concerned agencies in Saudi Arabia, is working to ensure safety and better facilities, medical facilities for the pilgrims during Haj 2019.

Shri Naqvi said that a large number of Muslim women are likely to go to Haj 2019 without “Mehram” (male companion). More than 2100 women have applied to go to Haj 2019 without “Mehram”.For the first time, the Centre’s Modi Government had lifted ban on women going to Haj without Mehram last year, which resulted into about 1300 Indian Muslim women went on Haj 2018 without any male companion. They had been exempted from the lottery system. For the first time, more than 100 women Haj Coordinators and Haj Assistants had been deployed to assist Indian women Haj pilgrims in 2018.

The Minister said that Haj Committee of India has received more than 2 lakh 47 thousand applications yet for Haj 2019. This includes about 47 per cent women. For the first time after the Independence, a record number of Muslims from India performed Haj 2018 and that too without any subsidy. Record 1,75,025 Muslims from India performed Haj 2018 which include about 48 per cent women. The Indian Government has requested the Saudi Arabia Government to increase India’s annual Haj quota for Haj 2019 also.

Shri Naqvi said that making the Haj process completely online/ digital has helped to make the entire Haj process transparent and pro-pilgrims. For Haj 2019, about 1 lakh 36 thousand online applications have been received.

Shri Naqvi said that Ministry of Minority Affairs, in cooperation with Saudi Arabia Haj Consulate, Haj Committee of India and other concerned agencies, had completed preparations for Haj 2018 about 2 months before schedule to ensure smooth Haj pilgrimage. This time, preparations for Haj 2019 had been started 3 months before schedule to make this Haj more comfortable for the pilgrims.