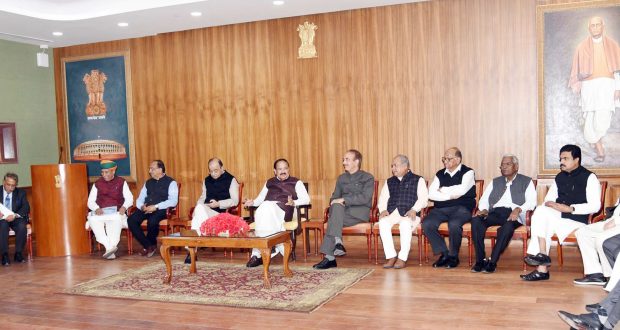 The Vice President and the Chairman, Rajya Sabha, Shri M. Venkaiah Naidu interacting with the Floor Leaders of various political parties in Rajya Sabha, in New Delhi on December 10, 2018.

RS Chairman urges leaders to ‘aid, assist and advise’ him for a smooth Session

in National December 11, 2018 Comments Off on RS Chairman urges leaders to ‘aid, assist and advise’ him for a smooth Session 575 Views

Newdelhi:11/12/18:Both the ruling and opposition parties in Rajya Sabha yesterday assured the Vice President and the Chairman Shri M. Venkaiah Naidu of their full cooperation for a productive Winter Session of the House beginning tomorrow. Leader of the House Shri Arun Jaitley and Leader of the Opposition in Rajya Sabha Shri Gulam Nabi Azad spoke of their keenness about a meaningful and productive Session at a meeting of leaders of different parties convened by the Rajya Sabha Chairman Shri M. Venkaiah Naidu today. Both of them sought equitable  allocation of time for the Government’s legislative proposals and the issues that opposition seeks to raise in the House.

In his opening remarks, Shri Venkaiah Naidu urged the leaders of all sides in the House to ensure a productive Winter Session which would be the last full-fledged one before the general elections next year. Shri Naidu called upon them to “aid, assist and advise” him in ensuring a smooth Session.  He noted that both the Government and the opposition have the right to pursue respective agendas but that should be done while ensuring effective functioning of the House.

Shri Venkaiah Naidu hailed the high voter turnout in the just concluded five State Assembly polls as yet another indication of the people’s faith in parliamentary democracy and a reminder that legislatures need to rise to their expectations. Shri Naidu complimented the Election Commission of India, the respective State Governments and the people for successful conduct of polls.

Shri Naidu informed the leaders that further to the success of e-notice (submission of notices by members online) during last Session, it has now been decided that notices of members for submission of Zero Hour notices will now be accepted up to 9.30 AM  instead of the earlier 10.00 AM on each sitting of the House. He said this advancement would give him more time to properly prioritise such notices in the available time.

Finance Minister and Leader of the House Shri Arun Jaitely said that as far as the Government is concerned, we are willing to discuss any issue if only time is properly allocated for both the Government and the opposition.

Leader of the Opposition Shri Ghulam Nabi Azad said that we too want the House to function and the bills to be passed and a meaningful and productive Session. The only way we can reach out to the people is by raising the issues of concern to them. Winter Session is happening a full four months after the last Session and the opposition wants all important issues to be discussed.

It was agreed in the meeting that both the sides will address each others concern while allocating time for the legislative and other business in the meeting of the Business Advisory Committee to be held on Wednesday.

It was also agreed in the meeting that the House would be adjourned for the day tomorrow after making obituary references to the former Prime Minister late Shri Atal Bihari Vajpayee.

2018-12-11
Editor in chief
Previous: Dissemination of Trends and Results of General Elections of 5 Assemblies on 11th December, 2018
Next: Russia calls for enabling laws to fully tap India-Russia cooperation potential