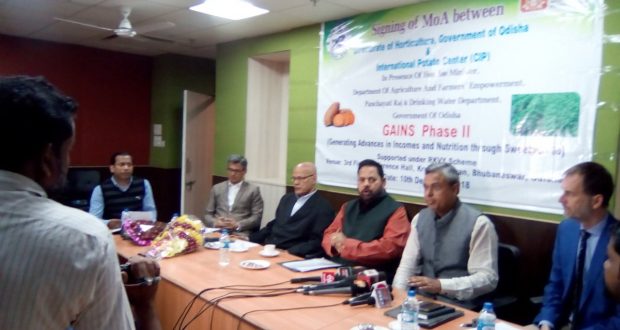 in State News December 11, 2018 Comments Off on Odisha Government’s Directorate of Horticulture signed a MOU with International Potato Centre 721 Views

The significant MoA was signed at the Krushi Bhawan here in presence of Odisha Agriculture and Farmers’ Empowerment Minister Pradeep Maharathy.

As per a press note released on the occasion, Rs 8.46 crore from the RKVY is to be spent on it in the tribal districts of Keonjhar, Gajapati, Angul and Rayagada in the next three years.

In the first phase during 2013-2017 and under the RKVY scheme, such a step was taken and Odisha had stood first in the country. Now Odisha in its 42,000 hectares of land produces 4 lakh metric tonnes of sweetpotato.

Following today’s MoA with the International Potato Centre (CIP), Odisha in the next three years aims at augmenting its sweetpotato production in 1625 hectares, the press note stated.