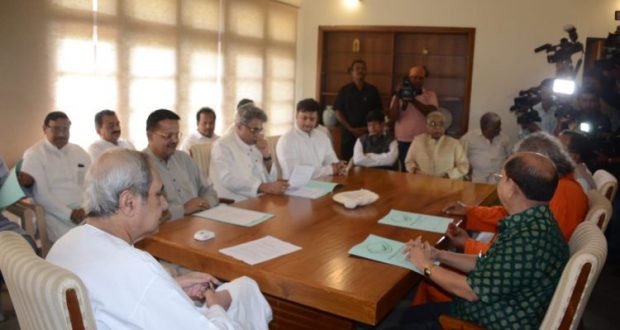 in State News December 9, 2018 Comments Off on BJD has decided to demand special category status for Odisha in the winter session of Parliament 504 Views

Bhubaneswar: 9/12/18:The Biju Janata Dal (BJD) has decided to demand special category status for Odisha in the winter session of Parliament beginning December 11. This was revealed by the BJD spokesperson Pratap Deb on Sunday.

Briefing the media immediately after the BJD parliamentary party meet under the chairmanship of party supremo and Odisha Chief Minister Naveen Patnaik, Deb said it will raise nine different issues including rights of farmers.

The proposal of 33 per cent reservation for women in Parliament and state Assemblies will also be tabled during the session beginning from December 11.

Deb said: “In the presence of the Members of Parliament, today we discussed the key issues that Biju Janata Dal needs to raise in the upcoming session of the Parliament”.

“The foremost issue that will be raised in both the Houses, Lok Sabha, and Rajya Sabha, is to grant special category status to Odisha. This demand will also be raised by leaders of some other states, so we are in talks with them as well”, he added.

Deb said the BJP had declared in its manifesto to implement the Swaminathan report, but till date, this has not happened. He said the BJD will raise this issue in the Parliament and added that the farmers’ interest will not be compromised at any cost.

The BJD spokesperson said the Odisha Assembly passed the 33% reservation for women bill a few days ago. To take the issue further, senior leaders of BJD will be meeting other regional and national leaders for arriving at a consensus for the passing of this pending bill in the Parliament.

The issue pertaining to ‘Cyclone Titli’ will be taken up in the Parliament on a wider scale. Deb said the Centre has already sanctioned financial assistance to other cyclone affected states, but Odisha is yet to get the assistance.

Our disaster preparedness has been praised by the Centre. The NDRF had also commended Odisha’s effort in this regard. But, the state is yet to get financial assistance from the Centre, Deb said and lashed out at it for overlooking the interest of the state.

The Centre was providing  Rs 220 crore to the state for funding scholarships of SC/ST students, but this has been reduced it Rs 30-40 crore. The BJD spokesperson described Centre’s action as unjust. This issue will be raised in the session vehemently, he added.

2018-12-09
Editor in chief
Previous: Odisha CM Naveen Patnaik inaugurated a 7-day ‘Magic of Mangalajodi’ Photo Exhibition
Next: Odisha Governer has ordered a Vigilance probe into the corruption charges made against the Vice-chancellor of OUAT