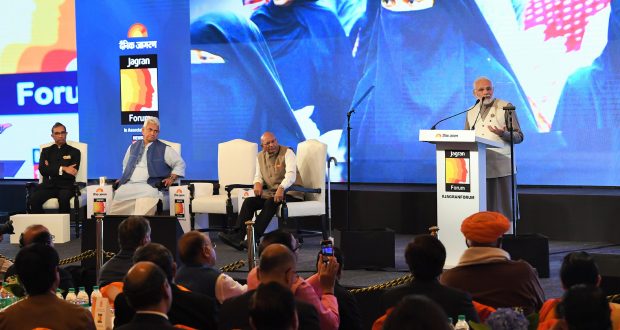 The Prime Minister, Shri Narendra Modi addressing the Jagran Forum, on the occasion of the 75th anniversary celebrations of Dainik Jagran newspaper, in New Delhi on December 07, 2018. The Minister of State for Communications (I/C) and Railways, Shri Manoj Sinha and other dignitaries are also seen.

in Uncategorized December 7, 2018 Comments Off on PM’s address at Jagran Forum on the occasion of 75th anniversary Celebration of Dainik Jagran 558 Views

Addressing the august gathering in Taj Palace hotel, the Prime Minister specially complimented, among others, the hawkers who distribute the newspaper every day, on this occasion. He said the hawkers have helped the newspaper reach so many households daily.

The Prime Minister said that the Dainik Jagran has played a key role in generating awareness, and in the re-building of the nation. He said, that based on his own experience, Dainik Jagran has strengthened the movement towards change in the country and society. In this context, he mentioned initiatives such as Beti Bachao, Beti Padhao; and Swachh Bharat Abhiyaan. The Prime Minister asserted that with the digital revolution, media would play a key role in strengthening the country.

The Prime Minister said that “Minimum Government, Maximum Governance”and “सबका साथ, सबका विकास” form the basis for New India. He said that today, the youth feel that they are stakeholders in the development process.

He raised the question: why is our country backward even so many decades after independence. Why could the problems of our people not be resolved, he asked. He said that now electricity is reaching places it had not reached for 70 years, and States which remained unconnected to the railway, are being brought on the railway map.

The Prime Minister gave a series of comparisons. He compared the period of 67 years (independence to 2014) with his own period of four years (2014-2018) in office.