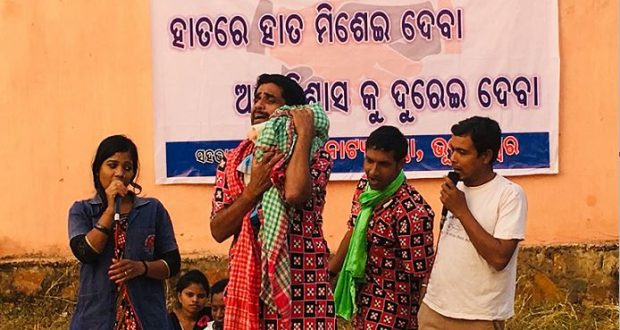 Barbil:7/12/18: A weeklong awareness campaign to eradicate superstition from society has received a warm response from local communities. The programme designed through street plays in nearby seven villages of Deojhar gram panchayat in Keonjhar district, was organised by JSPL Foundation, the CSR arm of Jindal Steel and Power Ltd (JSPL).
Twelve plays were performed at Sialijoda, Kuldum, Gobardhanpur, Mahadebnasa, Deojhar, Murga and Thakurani villages.
Among the themes were age old beliefs like witchcraft, animal sacrifice to get rid of health issues and witch-hunting. Locals in large numbers including men, women, the elderly, and village health practitioners were seen enjoying the plays. Interestingly, in some villages people were seen enquiring from the troupe about consequences of not following superstitious beliefs. Through the plays, around 2000 locals were educated about myths, superstitions, rituals and beliefs. They were also informed about the nature of common diseases and their remedies with the help of ASHA workers.
Mangal Munda, sarpanch, Deojhar GP said, “It is a praiseworthy step. We all need to advocate the need for generating these awareness events so that society can be empowered to prevent recurrence of incidents based on superstitions in future.”
Janardan Naik, former sarpanch, Deojhar GP said, “Such campaigns will certainly have a deep impact on the society resulting in gradual eradication of superstition.”

2018-12-07
Editor in chief
Previous: Seven major city parks of BDA have got a new look with meaningfully designed signages.
Next: PM’s address at Jagran Forum on the occasion of 75th anniversary Celebration of Dainik Jagran