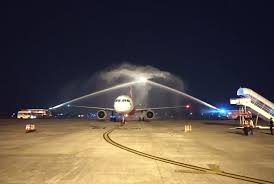 The AirAsia flight carrying 28 flyers from Bangkok was received with a warm welcome by the BPIA authorities. The inaugural flight received a water cannon salute at the airport.

The Bangkok-Bhubaneswar flight landed at the BPIA at 11.35 pm on Friday night.

The passengers who were to board the AirAsia flight from Bhubaneswar to Bangkok was given a customary welcome at the airport before take off at 12.25 am.

The Bhubaneswar-Bangkok AirAsia flights will be operated for three days a week. The carrier FD-113 will fly to Bangkok at 12.25 am on Sunday, Wednesday and Friday and reach the destination at 4.30 am (according to Bangkok time).