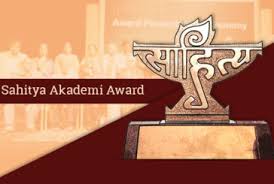 in Literature December 5, 2018 Comments Off on Sahitya Akademi has announced the Bhasha Sammans 884 Views

NEWDELHI:5/12/18:Sahitya Akademi  has  announced  the  Bhasha Sammans  to  the  below writers/scholars in recognition of their significant contributions in the field of Classical and Medieval Literature and also in Unrecognized Languages.Each Bhasha Samman carries a cash prize of (  1,00,000) an inscribed copper plaque and citation. The Samman will be presented to the Awardees by the President of Sahitya Akademi at a special function which will be held on a later date.The brief bio-datas of the Bhasha Samman Awardees are given below:

Dr Gaganendra  Nath Dash (born, 25 November 1940) is an eminent scholar and writer in Odia.  He has 30 years of teaching experience in different positions and retired as the Head of the Department of  Linguistics,  Berhampur   University.   He  had  a  seminal  role  in  preparing  a  classified  and comprehensive bibliography, entitled Orissa.  His works on the role of the priests of Jagannath temple in medieval Odisha was  quite  influential  and  brought much acclaim.  He has worked  on various research projects, namely, Harvard-Bhubaneswar Project and Orissa Research Project I &  II which aimed  at  a  long-term  fieldwork  oriented  ethnographic  study  of  urbanization  and  socio-cultural changes in Bhubaneswar in Odisha.

Dr Shailaja  Bapat  is an eminent writer in Marathi.   She has written a voluminous work entitled, A

Critical  Study  of the Brahmasutras    in three volumes.  The author has provided the variant readings of the Sutras.  The findings of the variant readings are based on the manuscripts of the BAdarAya/Ea’s BrahmasUtrapAtha.    He  has  collated  these  manuscripts  on  the  ancient  text  published with  theSariakamimamsabhasya      of  SaEkaracarya    as  vulgate   manuscript.     She  has  authored   several  other books,   including   two   bibliographies    on  Suddha   Advaita   and   Kevala   Advaita   Vedanta.      She  was awarded  the  EmeritFellowship   by the  UGC  and  has a number  of research  articles.    Dr. Bapat  was Government    Nominee    of  the   Regulating    Council   and   Executive    Council   of  Bhandarkar    Oriental Research  Institute,  Pune.