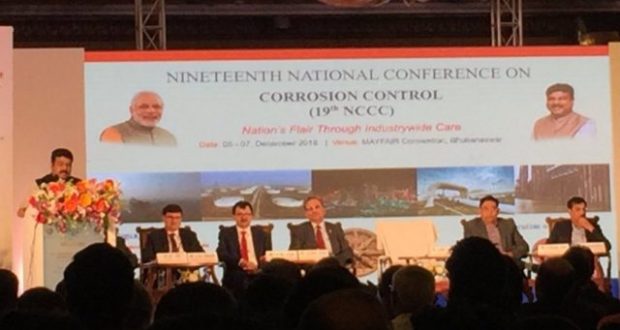 in National December 5, 2018 Comments Off on 19th National Conference on Corrosion Control was inaugurated 734 Views

The event, having an aim of finding solutions to deal with the industrial corrosion problems, will continue till December 7.

The conference will analyse various industrial corrosion problems and provide a platform for interaction between industrialists, scientists and professionals to enhance the state of the art knowledge on corrosion science and engineering.

The conference is being organised by the National Corrosion Council of India (NCCI) in collaboration with CSIR-Central Electrochemical Research Institute and Indian Oil Corporation (Pipeline Division). It is hosted by South Eastern Region Pipelines (SRPL), Bhubaneswar.

P.C. Choubey, SERPL Executive Director, said that around 400 delegates including chief executive officers, technocrats and scientists will participate in the conference.

2018-12-05
Editor in chief
Previous: Odisha government withdraw cases against Abhijit Iyer
Next: Orissa High Court granted bail to Abhijit Iyer Mitra who was arrested for his derogatory remarks on Odisha