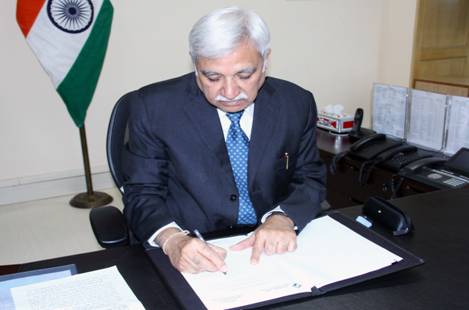 in National December 3, 2018 Comments Off on Sunil Arora takes over as new Chief Election Commissioner of India 526 Views

Born on 13th April, 1956, Shri Arora, a former Indian Administrative Service (IAS) officer of Rajasthan cadre 1980 batch, superannuated on 30th April, 2016 as Secretary, Ministry of Information & Broadcasting, Government of India. During the 36 years of his service, he held various crucial positions in the State Government of Rajasthan and in the Central Government.

He served in several key positions viz. Secretary in the Ministry of Skill Development and Entrepreneurship, and Ministry of Information & Broadcasting, Chairman & Managing Director of the then Indian Airlines between 2002 to 2005, member of Board of Directors of Air India, Airport Authority of India Ltd. and National Skill Development Corporation. Shri Arora also served as the Chairman of Rajasthan State Industrial Development & Investment Corporation (RIICO) in 2005-2013 and as Additional Chief Secretary, Home, Government of Rajasthan in 2013-2014 among several other important positions.