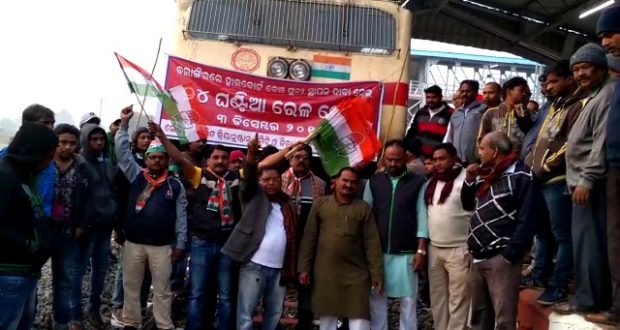 in District Diary December 3, 2018 Comments Off on Normal life came to a grinding halt due to 24-hour bandh in Balangir 569 Views

Balangir:3/12/18: Normal life came to a grinding halt here today due to 24-hour bandh by the lawyers’ association and Central Action Committee (CAC) demanding a permanent High Court bench in the district.

The shops, educational institutions and commercial establishments remained closed since morning due to the shutdown.The ‘rail roko’ agitation by the lawyers at Balangir railway station halted train movements in the district. In view of the protest, the railway authorities have cancelled, partially cancelled and diverted several trains.

The passengers, who were unaware of the bandh scheduled today, were found on the platforms inside the station waiting for the trains.

Earlier, the Balangir lawyers’ association had announced for 24-hour bandh on Dec 3 in the district without joining the 48-hour ‘Maha Bandh’ on Nov 29 and 30 by the Sambalpur Bar Association and CAC over setting up of a permanent bench of the Orissa High Court in western Odisha.

2018-12-03
Editor in chief
Previous: Odisha Chief Minister felicitated the participants of Hausla 2018
Next: Biju Patnaik International Airport will have its third terminal at an estimated cost of Rs 930 crore