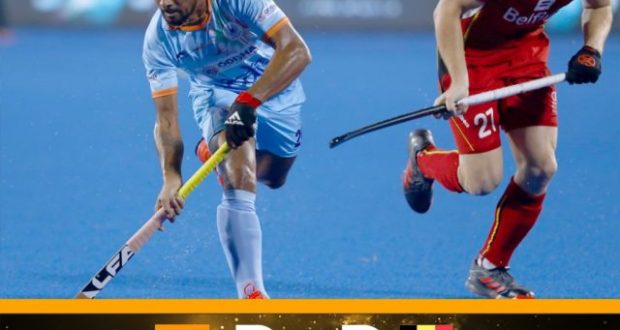 in Sports December 3, 2018 Comments Off on India hold Belgium in exciting clash 580 Views

Bhubaneswar:3/12/18: India recovered from a slow start to produce a superb second half performance and hold title contenders Belgium to a 2-2 draw in a crucial Pool C match of the FIH World Cup at Kalinga Stadium here on Sunday.

Alexander Hendrickx drew first blood for Belgium when he fired a penalty corner through the legs of Indian goalkeeper P.R. Sreejesh in the eighth minute.

Harmanpreet Singh scored the equaliser for India off a penalty stroke in the 39th minute before Simranjeet Singh put them in the lead in the 47th.

But Florent van Aubel earned a point for the 2016 Rio Olympics silver medallists when he scored Belgium’s second goal in the 56th minute.

Belgium started in explosive fashion and dominated the first half. But the Indians gradually found their rhythm and put in a much improved performance after half-time.

Belgium were challenging the Indian defence right from the start. At the other end of the pitch, the Indian forwards were finding it difficult to even penetrate into the Belgium penalty circle.

The best chance for the hosts in the opening quarter came just before the first break when an excellent pass to Mandeep Singh at the goalmouth was blocked out by Belgian goalkeeper Loic van Doren.

Most of the Indian attacks were coming down the right flank with the experienced Chinglensana Singh at the heart of many of the moves.

The Belgium defenders were hardly allowing any space to the Indians. As a result, the hosts were finding it difficult to maintain possession around the Europeans’ penalty area.

The Indian defence also were good with their man marking, but they were being stretched by the intelligent off the ball movement of the Belgian players.

The first penalty corner for the hosts came around five minutes into the third quarter after one of the rare occasions when an Indian counter-attack caught the Belgian defence off guard.

The second Indian penalty corner a short while later hit a Belgian defender on his foot right on the goal line and the umpire had no hesitation in awarding a penalty stroke to the hosts.

Harmanpreet stepped forward to coolly slot the ball past van Doren as the crowd erupted in a frenzy of wild celebration.