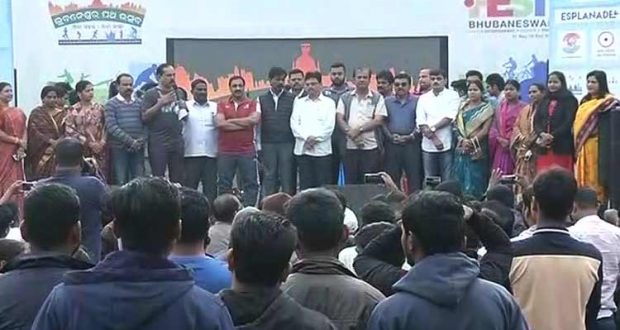 Bhubaneswar Patha Utsav once again kicked off in smart city

in Smartcity Bhubaneswar December 2, 2018 Comments Off on Bhubaneswar Patha Utsav once again kicked off in smart city 616 Views

Bhubaneswar2/12/18:: At a time when the denizens of Bhubaneswar and people across the State are dipped in the fever of Men’s Hockey World Cup, the Bhubaneswar Patha Utsav once again kicked off on Sunday adding more colours to the ongoing extravaganza.

People thronged the streets of Janpath from Master Canteen Square to Rupali Square early morning today to take part in the Patha Utsav.

“The Patha Utsav kick started today but it will be held for only three Sundays this time as the construction of various roads in the city are underway,” said Bhubaneswar mayor Ananta Narayan Jena after inaugurating the event.

Jena further said that many developmental works were carried out to beautify the smart city and also appealed people to join hands to keep the city clean.

The morning event was filled with programmes, including sporting and cultural activities. “We are happy that Patha Utsav resumed today but it should continue the entire winter,” said a reveller.

The Patha Utsav will next be held on December 9 and 16 from 7 am onwards.