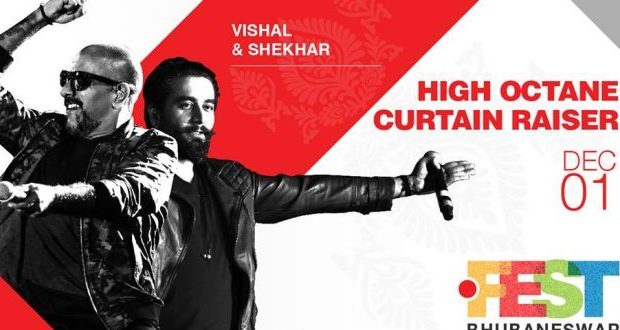 First edition of.FEST began with all pomp and gaiety

in Smartcity Bhubaneswar December 1, 2018 Comments Off on First edition of.FEST began with all pomp and gaiety 567 Views

Bhubaneswar:1/12/18: The first edition of.FEST (Bhubaneswar City Festival) organized by Bhubaneswar Development Authority and Odisha Tourism was launched began with all pomp and gaiety on Saturday.

The festival, which coincides with Odisha Hockey Men’s World Cup 2018 being hosted in Bhubaneswar, saw an astounding turnout of thousands of attendees from different parts of the world and the country.

The curtain raiser to the inaugural edition of .FEST gave audiences a spectacular performance by Bollywood’s biggest and most dynamic music composer duo, Vishal and Shekhar.

They set the stage on fire with their non-stop performance. Music lovers were enthralled watching their favourite musicians perform live and were in high spirits throughout as they danced and sang to their super hit numbers.

The audiences were treated to an amazing line up of songs and cheered loudly as they made the most of Vishal and Shekhar’s incredible performance at .FEST.

The International Street Food Festival which also opened its doors to all at .FEST, received an overwhelming response. Visitors were spoilt for choice as they chose from a wide range of appetizing street food specialities with cuisines from Odisha, India and all over the world.