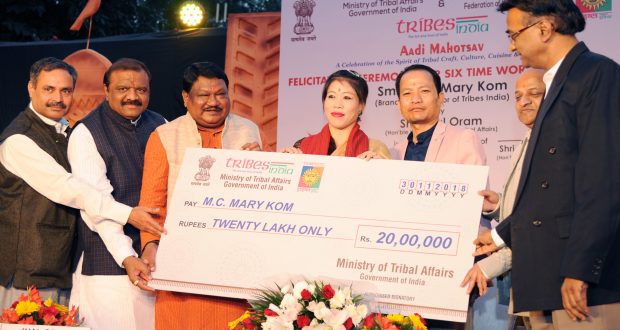 nEWDELHI;30/11/18:Ministry of Tribal Affairs and TRIFED felicitated Ms. Mary Kom, 6th time Women’s World Boxing Champion and the Brand Ambassador for the TRIBES India’s Punchatantra range of products handcrafted by tribal master-craftsmen from across the country at the closing ceremony of “Aadi Mahotsav” at Dilli Haat today. Aadi Mahotsav was organized by M/o Tribal Affairs and TRIFED from 16th to 30th November, 2018.

The facilitation ceremony was presided over by Shri Jual Oram,Union Minister for Tribal Affairs in the august presence of the Minister of State for Tribal Affairs, Shri Jaswantsinh Sumanbhai Bhabor and more than 1000 tribal artisans from more than 20 States, showcasing various art, crafts and cuisines. The tribal craftsmen and women showcased exquisite handcraft and handloom items including Baag, Maheswari, Chaderi, Banarasi, Sambalpuri Sarees and much more, to the delight of people of Delhi. This had proved a boom for tribal artisans, who have done brisk business of Rs.16 Crores during the 15 days long event, which includes orders from various Organisations including TRIFED.Felicitating her, Shri Jual Oram said that Ms. Mary Kom is the pride of India who has recently won her 6th Women’s World Boxing Championship gold, breaking all previous records of Gold Medals won by any women boxer anywhere in the world.  It is a matter of great pride for Ministry Tribal Affairs and TRIFED/TRIBES India to honour this sporting Icon. Ms. Mary Kom is also the Brand Ambassador for the TRIBES India’s Punchatantra range of products handcrafted by tribal master-craftsmen from across the Country.  “Punch” Tantra range is magnificent collection and inspired by Ms. Mary Kom .

The festival ran for a fortnight till 30th November, 2018. As per the theme of the festival, People of Delhi truly enjoyed the celebration of the Spirit of Tribal Culture, Cuisine and Commerce.  The festival featured exhibition-cum-sale of tribal handicrafts, art, paintings, fabric, jewellery.