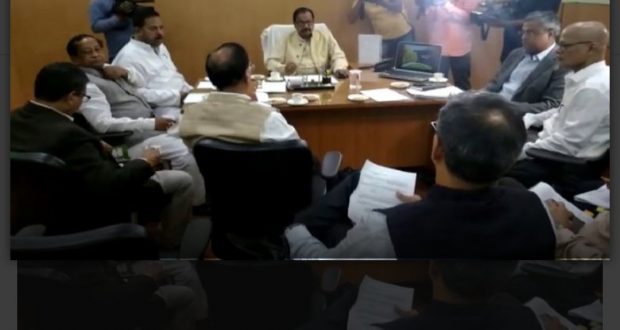 in State News November 29, 2018 Comments Off on Odisha Government’s Inter-Ministerial Committee was held at the State Secretariat 610 Views

Bhubaneswar:29/11/18: The first ever meeting of Odisha Government’s Inter-Ministerial Committee was held at the State Secretariat here today chaired by Finance Minister Shashi Bhusan Behera. It has been formed by Chief Minister Naveen Patnaik to discuss on Price, Prestige & Pension being demanded by the agitating farmers since long.

Informing media, the Finance Minister said that the next Inter-Ministerial Committee meeting will be held on December 7 to whch more and more organizations of the farmers and agricultural experts will be invited to participate in the deliberations. It would be the first such extended meeting on farmers’ issues.

In his media reactions soon after the important meeting, the Finance Minister said, “The issue is very vast and it is only the first meeting. In this context, it would be more justified if suggestions are invited from the several organizations and associations of the farmers. Not only Nabanirman Krushak Sangathan, but also their other associations across the State will be invited for valuable suggestions.”

“The next meeting has been slated on December 7 to which the farmers’ associations and experts will be invited,” he informed.

2018-11-29
Editor in chief
Previous: Odisha will be truly internationalised and we will be able to make the state a Quality Higher Education hub : Naveen Patnaik
Next: Five-day twin annual events of Konark Festival and International Sand Art Festival will begin from December 1