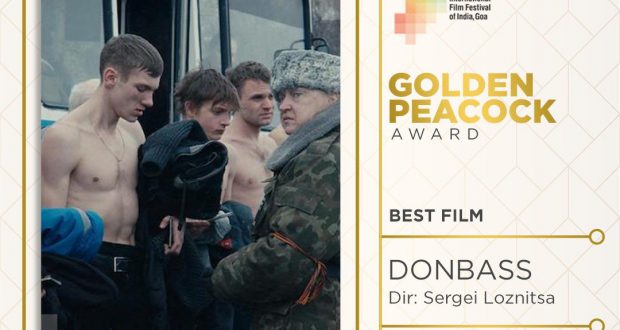 in Entertainment November 28, 2018 Comments Off on Donbass wins the Golden Peacock at IFFI 2018 904 Views

Goa:28/11/18:Donbass’ directed by Sergei Loznitsa has won the coveted Golden Peacock Award at the 49th International Film Festival of India (IFFI), which concluded in Goa on November 28, 2018. The Golden Peacock Award carries a cash prize of Rs 4 million (Rs 40 lakhs) to be shared equally between the Producer and the Director, Trophy and the citation.

Donbass tells the story of a hybrid war taking place in a region of Eastern Ukraine, involving an open armed conflict alongside killings and robberies perpetrated on a mass scale by separatist gangs. In Donbass, war is called peace and propaganda is uttered as truth. A journey through Donbass unfolds as a series of curious adventures. This is not just a tale of one region or a political system; it is about a world lost in post-truth and fake identities.

Donbass is the official submission of Ukraine for the ‘Best Foreign Language Film’ category at the 91st Academy Awards in 2019. It was selected as the opening film in the Un Certain Regard section at the 2018 Cannes Film Festival. At Cannes, Sergei Loznitsa won the ‘Un Certain Regard’ Award for Best Director. 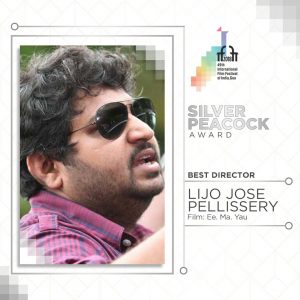 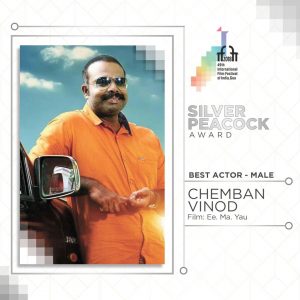 Lijo Jose Pellissery won the Best Director Award for his 2018 film ‘Ee.Ma.Yau’. The film is a stunning satire on death and how it affects human lives. Set in Chellanam, a coastal village in Kerala, the film shows the plight of a son who tries to arrange a worthy funeral for his father; he is however met with unpredictable obstacles and reactions from different quarters. The Best Director gets the Silver Peacock Award and a cash prize of Rs 1.5 million (Rs 15 lakhs).

He also won the Best Director Award at the 48th Kerala State Film Awards for Ee.Ma.Yau.

Chemban Vinod is the Best Actor

The Best Actor (Male) Award has gone to Chemban Vinod for his portrayal in Ee.Ma.Yau of ‘Eeshi’, a son who tries to arrange a worthy funeral for his father but is met with unpredictable obstacles and reactions from different quarters. 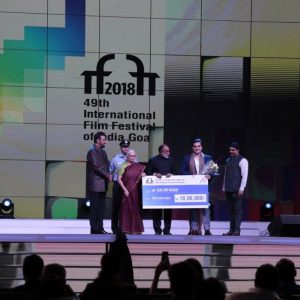 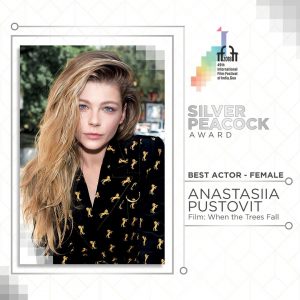 The Best Actor (Female) Award has gone to Anastasiia Pustovit  for her portrayal of a ‘Larysa’, a teenage girl in the Ukrainian film ‘When the Trees Fall’.

Both Best Actor (Male) and Best Actor (Female) are honoured with the Silver Peacock Trophy and a cash prize of Rs 1 million (Rs 10 lakhs) each.

Milko Lazarov walked away with the Special Jury Award for his film ‘Aga’; the film focuses on the story of Sedna and Nanook, an elderly couple from Yakutia, and the particular challenges they face in the midst of a frigid landscape. The Special Jury Award carries a cash prize of Rs 1.5 million (Rs 15 lakhs), a Silver Peacock Award and a citation.

Alberto Monteras II received the Centenary award for ‘Best Debut Feature Film of a Director’ for his Filipino Movie ‘Respeto’. ‘Walking with the Wind’, directed by Praveen Morchhale, won The ICFT –UNESCO Gandhi Medal instituted by the International Council for Film, Television and Audiovisual Communication, Paris and UNESCO. The criteria for the Gandhi Medal reflect UNESCO’s fundamental mandate of building peace in the mind of men and women, particularly human rights, intercultural dialogue, promotion and safeguard of diversity of cultural expressions.

’Walking with the Wind’ tells the story of a 10 year old boy in Himalayan Terrain, who mistakenly breaks his friend’s school chair. His daily seven km long journey to school in mountainous terrain on a donkey, turns mammoth and challenging when he decides to bring the chair to his village.

Salim Khan, the celebrated actor, story-screenplay-dialogue writer of Hindi films was honoured with the IFFI 2018 Special Award for his Lifetime Contribution to Cinema. The prestigious award consisting of a cash prize of Rs 1 million (Rs 10 lakhs), Certificate, Shawl and a Scroll has been conferred upon the master filmmaker for his outstanding contribution to cinema.

2018-11-28
Editor in chief
Previous: President of India Receives the First Copy of the book “Making of New India”
Next: A.M. Naik appointed as Chairman of National Skill Development Corporation