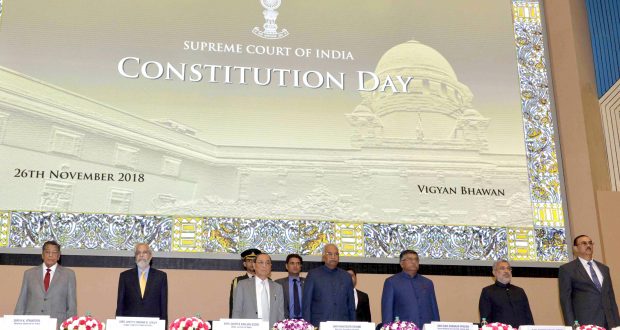 The President, Shri Ram Nath Kovind at the inauguration of the Constitution Day Celebrations, organised by the Supreme Court of India, in New Delhi on November 26, 2018. The Chief Justice of India, Shri Justice Ranjan Gogoi, the Union Minister for Electronics & Information Technology and Law & Justice, Shri Ravi Shankar Prasad and other dignitaries are also seen.

New Delhi:26/11/18:The President of India, Shri Ram Nath Kovind, inaugurated the Constitution Day celebrations, organised by the Supreme Court, to mark the anniversary of the adoption of our Constitution on November 26, 1949, today (November 26, 2018) in New Delhi.

Speaking on the occasion, the President said that the Constitution is the modern scripture of independent India. It is our suprema lex. However, it is more than just a collection of articles and clauses. For us Indians it is an inspirational and living document, an ideal of the society we are and the even better society we are striving to be.

The President said that Dr B. R. Ambedkar and his colleagues in the Constituent Assembly were remarkably large-hearted and generous in their approach. They allowed for flexibility in amending the Constitution and were accommodative of various streams of thought. Above all, they trusted the wisdom of future generations to expand the frontiers of freedom and liberty, justice and fraternity, fairness and equality. They trusted future generations to not just amend the Constitution’s text, but to constructively re-imagine and re-interpret it for changing times. If we continue to be true to this spirit, the Constitution can serve India for all times to come.

The President said that innovation and technology have brought gains. But they have also brought questions of access and privacy. For example, there is the dilemma of weighing data privacy against the use of data for the greater common good. Within these competing imperatives lie competing notions of justice. And such issues will probably stay with us through the 21st century.

2018-11-26
Editor in chief
Previous: Odisha Education Service Association has decided to call off the strike
Next: Playing a transgender in ‘Nagarkirtan’ has been a life-changing experience for me: Riddhi Sen