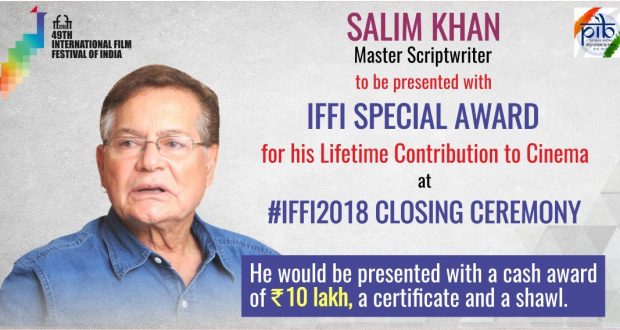 in Entertainment November 26, 2018 Comments Off on Master Scriptwriter Salim Khan to be presented with IFFI Special Award 528 Views

Goa:26/11/18:The master scriptwriter Shri Salim Khan would be honoured by the IFFI Special Award for his lifetime contribution to cinema, at the closing ceremony of the 49th edition of the International Film Festival of India, Goa, on November 28, 2018. He would be presented with a cash prize of 10 lakh rupees, a certificate and a shawl.

This was announced today, by the Union Minister of State for Information & Broadcasting (I/C), Col. Rajyavardhan Rathore, on Twitter.Salim Khan was born on November 24, 1935 in Indore. As a master screenwriter, he is known for having penned the masterful screenplays of several super-hit films such as Deewar, Zanjeer and many others, and in particular Sholay, one of the greatest hits of Indian cinema. He has registered a memorable contribution as an actor and producer as well.

2018-11-26
Editor in chief
Previous: Playing a transgender in ‘Nagarkirtan’ has been a life-changing experience for me: Riddhi Sen
Next: Odisha Chief Minister launched the ‘Mo Cycle’ service in Bhubaneswar