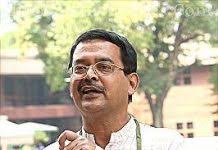 Director General of Police directed the SPs to provide foolproof security to Kharavela Swain in their respective district.

in Politics November 26, 2018 Comments Off on Director General of Police directed the SPs to provide foolproof security to Kharavela Swain in their respective district. 594 Views

Bhubaneswar:26/11/18: In the wake of the attack on Utkal Bharat president Kharavela Swain by two persons at Kasipur in Odisha’s Rayagada district, Director General of Police (DGP) RP Sharma on Monday directed the Superintendents of Police (SPs) to provide foolproof security to him in their respective district.

The DGP also asked the SPs to deploy adequate number of police personnel at meetings to be conducted by Swain to thwart any possibility of an attack on him.

In a press briefing on Sunday, Sharma had said that acting on the directive of the Chief Minister, the Crime Branch will conduct a thorough investigation into the incident to ascertain the reason behind the assault on the former MP and the conspiracy behind it. Besides, the state investigating wing is most likely to bring the previous assaults on him at Ali in Kendrapara and Khaira in Balasore district under the purview of its investigation