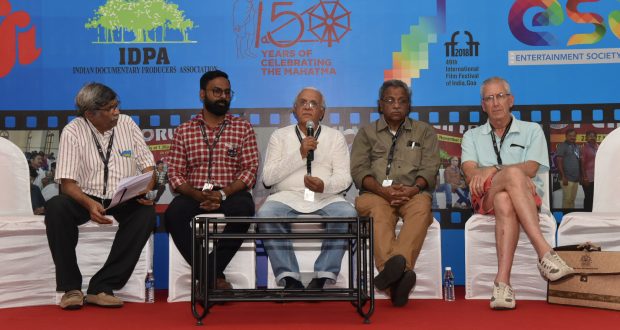 The Heart Speaks through Cinema

in Column November 24, 2018 Comments Off on The Heart Speaks through Cinema 627 Views

Cinema has, through the generations, captured the stories and creative inspirations of the filmmakers across the world. Though modern advancements have raised the bar on how films are made, it is the heart of the storyteller that still remains the true essence of the movie. This the panellists on Day 3 of the Open Forum agreed to be the crux of any film making endeavour.

In deliberating on ‘New Media opening new opportunities for the survival of the film industry’, David Shapiro, Uplifting Cinema Pvt. Ltd., from America said that it ‘is the heart that has spoken for thousands of years in theatre and drama and in film.’ He eloquently elaborated, “It’s the same heart that has pulsed through the veins of all these dramas.”

It’s not technology, he implored, but ‘what is in the heart’ that speaks. He finds that filmmakers have become so enamoured by the equipment and abilities of the special effects that ‘we’ve lost touch with what motivates people to watch a drama or presentation of art in the first place.’

He cited MTV in India as an example of wearing itself out in terms of content. “It became irrelevant to people’s lives and they tuned into things that made them smile or brought them insight or moved them in some way. That comes not from the cameras but from the heart.”

What counts he noted is how relevant the film is to the audience, what is the means of delivery to them, and what is the content communicated. He said, “No matter what the technology employed, there is a demographic to every audience in mind. Each project has to be tailored to the people you are speaking and that is completely separate from the way in which the film technology is used. You have to consider the means of delivery. Are you going to sell to video in demand like Netflix or a theatrical distribution?”

All the panellists agreed that content still holds a pivotal position in filmmaking. Vinod Ganatra, Chairman, Non-feature Film, IFFI 2018 expressed his concerns over the ‘yeh bhi leh loh’ culture of the current crop. He stated that emphasis was on the script in the old days, and shooting on celluloid meant careful selection of frames and shots. However digitisation has changed this.

He praised the transformation in film making over the years with young film makers making excellent movies. He recalled movies like Kharvas. He noted that short films are taking over the space, with even the duration of feature films getting shorter. This year they received an incredible 60 percent short film submission in all entries.

Making his debut at IFFI this year with his national award winning Sinjar, Pampally noted that the current advancements had definitely enhanced his journey. He has made 40 short films prior to this. While technology has made it easier for younger generations to make movies faster, there is a need he felt, to focus on the craft.

The short presentations were followed by a thought-provoking Q & A session. On being asked about the merits and demerits of new media, Shaji Karun, veteran filmmaker observed that digitilisation has enhanced the production process in terms of correction of images, reconstruction, many interpretations of the images can be manipulated. He spoke of movies like Avatar, Titanic that played heavily on VFX. But the downside he felt that movies that rely on this sort of technology lose their local touch.

When asked about the training required to get started Ganatra was quick to point the emergence of films schools mushrooming across the country. He felt that the faculty at times are inadequately trained and such institutions can reach out to independent filmmakers for support. Young filmmakers as a result of poor guidance lose hope and get frustrated with the whole process.