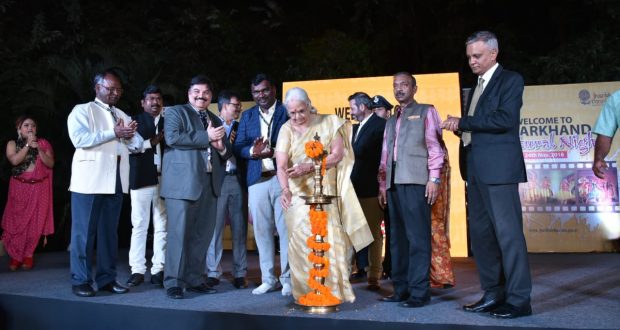 in Entertainment November 24, 2018 Comments Off on SPECIAL DAY AT IFFI PROMOTES JHARKHAND AS A FILM MAKING DESTINATION 647 Views

Gosa:24/11/18:It was a day dedicated for Jharkhand at the 49th International Film Festival of India. The scenic state bestowed with rugged hills, dense forests and mesmerising waterfalls got a much-needed impetus as a film shooting destination when dignitaries came together to celebrate ‘Jharkhand Day’ today at IFFI. 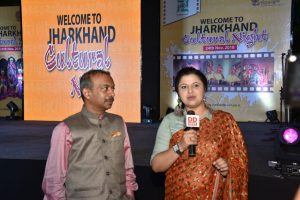 Film buffs thronging IFFI are getting a glimpse of the art, culture and cuisine of the Jharkhand through the multiple stalls promoting the State and its tourism initiatives. Handicrafts and cuisine of the state presented at the festival venues are attracting lots of people. A recipient of the Special Mention Award for promoting filmmaking in 2016, Jharkhand has rightfully been chosen as the State in Focus at IFFI this year. This is the first time that IFFI has started a State in Focus segment.  Six films either shot in Jharkhand under the Jharkhand Government Film Promotion Programme, or made in the language/dialect of the state are being screened during the Festival. The films are: ‘Begum Jaan’ (2017), ‘Ranchi Diaries’ (2017), ‘A Death in the Gunj’ (2016), ‘Mor Gaon Mor Desh’ (2018), ‘Ajab Singh ki Gajab Kahani’ (2017), and ‘Panchlait’ (2017). ‘MSD: The untold story’ (2016), the biopic on former Indian Cricket team captain M.S. Dhoni is also being  screened at Open Air Screening venue of IFFI.

Jharkhand had been captured multiple times on celluloid by great filmmakers including Satyajit Ray and Ritwik Ghatak when it was part of Bihar. But after attaining statehood, this scenic landscape seems to have slightly gone off the movie location map for some time.  Under the able leadership of Chief Minister Raghubar Das, the state is all set to capture back its lost glory in the arena of cinema making. Since the Jharkhand State Film Policy released in 2015, the State is steadily moving ahead in creating awareness among film-makers about its potential for film-making. Through these focussed celebrations at IFFI, the state has been firmly put in limelight for both the film-making industry as well as tourism.    It   is hoped  these efforts will help create opportunities for the local artists and help convert the state  into a tourist destination.

2018-11-24
Editor in chief
Previous: Children channelize their raw energy on to the Screen – Rajdeep Paul, Director, Malai(Director of the Odia non-feature)
Next: The Heart Speaks through Cinema