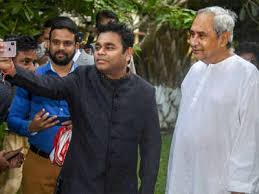 The Chief Minister released the hockey sports anthem ‘Jai Hind’ in the presence of Rahman in the state capital.

The music director met Patnaik ahead of the inaugural ceremony of the Men’s Hockey World Cup due at Kalinga Stadium in the capital from December 28.

“We are delighted that A.R. Rahman ji is here with us at Odisha. We are very lucky that he will be performing at two places, Bhubaneswar and Cuttack. Millions of his fans in Odisha are looking forward to listen to the music maestro,” Naveen said after the meeting.

Here is the link of Jai Hind India for all the available platforms – https://lnk.to/JaiHindIndia

The Chief Minister and Rahman also discussed conservation of traditional and tribal musical instruments and digitization of the music.

Rahman will be performing live during the inaugural ceremony of hockey world cup at Kalinga Stadium on November 27 and also at a concert at Barabati Stadium in Cuttack on November 28.

The song has been written by Gulzar and is based on a nationalistic theme. The anthem reflects sports, unity and inspiration. The song has been shot in Odisha, Mumbai, Chennai and other parts of the country, said Rahman.

2018-11-24
Editor in chief
Previous: Nick Jonas arrives in India ahead of his wedding to Priyanka Chopra
Next: Airport Authority of India has cancelled the license of the Air Odisha carrier for its irregular flight services.