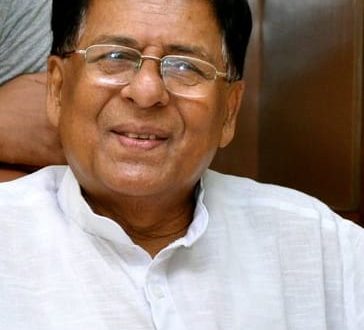 Bhubaneswar:22/11/18: Former Member of Rajya Sabha, Baishnab Charan Parida passed away on Thursday at the age of 77.He was elected to Rajya Sabha in July 2010 and his term ended on 1 July 2016. He fought to bring the Odisha Official Language Act, 1954.

He was born on 15 February 1941 in Srirampur, P.S. Mangalpur of Jajpur district, Odisha. His father Jagbandhu Parida was a worker in jute mill in Kolkata and a folk singer and his mother Sulochana Parida was a housewife. His early School education was at Mangalpur primary School. He was admitted to Mahtab High School at Mangalpur He was earlier a member of the Samajwadi Party from 1999-2008 and later joined Biju Janata Dal (BJD).

After his matriculation, he moved to Kolkata to continue his higher studies as his father was working there. He completed his Graduation in Kolkata from Bangabasi Collegeand MA In Political Science from the University of Calcutta. Later he completed his M.Phil from Moscow University 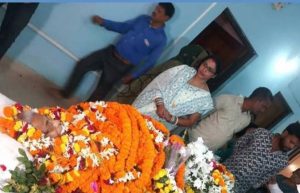 He was a member of Communist Party of India (CPI) from 1960 to 1992. A great follower of Karl Marx and his ideology, he slowly and steadily got involved in trade union and labour movement in West Bengal. In 1964 he was elected as member of Executive Committee of West Bengal Students Federation. Before that in 1963 he established West Bengal Oriya Students Association and in 1965 established West Bengal Oriya Citizen Council at Kolkata. In 1965 he formed Soviet Land (Oriya Editor) as a member of its editorial board. He continued as a member until 1975. He married Swarna Lata Parida on 3 March 1972.In 1974 Baishnab Parida moved to Moscow with his family for a special assignment for Indo-Soviet coordination. He stayed there until 1989. During his stay in Russia he held several positions. He was the correspondent of RIA Novosti from 1984 to 1989. He was elected as General Secretary of Indian Association in 1988. During that time he was special correspondent of the Samaja [Oriya Daily] and Eastern Media for East European countries.After fifteen years in Moscow he returned to Odisha. A Marxist and socialist at heart, he had to leave CPI due to some differences on application of Marxist ideology in Indian reality. During his stay in Moscow he read literature on Mohandas K. Gandhi and Ambedkar, slowly and steadily he was attracted towards Gandhian Philosophy and Lohia’ s ideology. And eventually in 1993 he joined Indian National Congress. Until 1998 he was in Congress but due to his differences with the state party leadership he left congress and joined Samajwadi Party in 1999 as its State President. He was in Samajwadi party until he resigned in 2008. In 2008 he joined BJD.

2018-11-22
Editor in chief
Previous: Union Petroleum and Natural Gas Minister came down heavily on the Odisha government for not allotting land in Khurda to set up a memorial on the historic Paika rebellion.
Next: Biju Janata Dal has highest regards for Prime Minister Narendra Modi who had talked effusively about the Hockey Men’s World Cup 2018