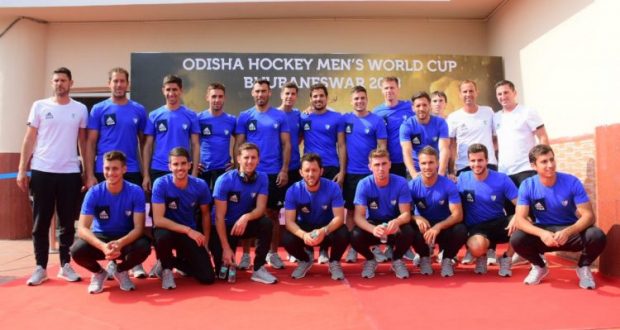 Bhubaneswar:21/11/18: Ahead of the upcoming Odisha Men’s Hockey World Cup at Kalinga Stadium here, Argentina Hockey Team arrived in the city today to a rousing reception.

According to sources, the guest team reached Biju Patnaik International Airport (BPIA) and was escorted to the hotel Mayfair Lagoon amid tight security by the police.

All the guest teams are likely to be in the city within a couple of days in order to commence their warm-up matches.

The Odisha Hockey Men’s World Cup Bhubaneswar 2018 will set the stage from November 28 to December 16 at the Kalinga Stadium in Bhubaneswar.

2018-11-21
Editor in chief
Previous: Odisha Chief Minister wrote to Prime Minister to cancel the order on Polavaram project
Next: Actress Madhuri Dixit Nene will perform at the opening ceremony of the Odisha Hockey Men’s World Cup