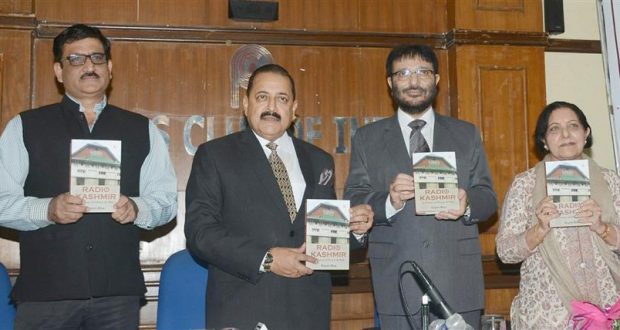 Dr Jitendra Singh congratulated the author of the book and appreciated his efforts for writing a book on Jammu and Kashmir after extensive and in-depth research. He said that the writer has wide experience of working in print and electronic, as well as private and government media. Dr Singh said that reporting of radio in Jammu and Kashmir has its own significance. He said the radio has evolved from a small set up to a level of influencing the lives of people in remote areas. The Minister added that a 10KW transmitter of All India Radio at Patnitop in Ramban District of J&K was inaugurated recently, that will provide services to people living in a radius of around 60 km (aerial) in various districts and also said that a radio station at Udhampur would be commissioned soon.

Speaking about the youth of J&K, the Minister said that many students from the state, supported by ‘Kashmir Super 30’ Project, have qualified for the JEE (Main & Advance) exam in recent years. He added that every year youth from Jammu and Kashmir are gaining top positions in Civil Services Exams, which shows that youth of J&K are hard working and aspiring for a bright future. The youth are now well-connected with the world with the increasing reach of internet, he added.

The book titled ‘Radio Kashmir – In Times of Peace & War’ has emanated from an extensive and intensive research by the author on the significant role played by the media in safeguarding the strategic interest of the Government and the masses by addressing the core issues concerning the welfare and security of a nation. Ever since its inception in 1947, the author traces the assiduous role played by Radio Kashmir in weaving a cohesive social and cultural fabric. It depicts unique distinction earned by Radio Kashmir by serving people and the nation, in this region, fostering and strengthening democratic institutions in the State.

The DG, AIR Shri F. Sheheryar and other dignitaries were also present on the occasion.

2018-11-20
Editor in chief
Previous: IFFI 2018 opens to a scintillating display of myriad cultures, film snippets
Next: Twelve people were killed and several injured while Bus fell off a bridge over the Mahanadi river