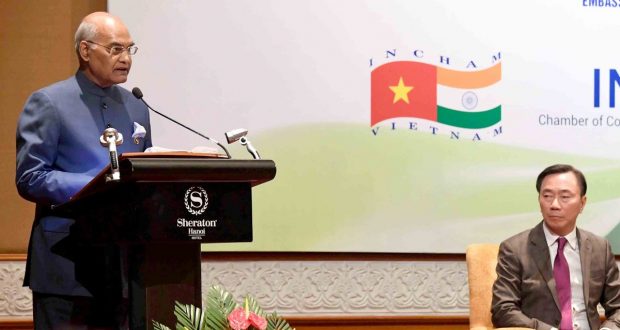 in International November 19, 2018 Comments Off on President of India in Vietnam; addresses Vietnam-India business forum 648 Views

Hanoi:19/11/18:The President of India, Shri Ram Nath Kovind, reached Hanoi today (November 19, 2018) as part of his two-nation state visit to Vietnam and Australia. Later in the afternoon, the President addressed the Vietnam-India Business Forum in the Vietnamese capital. Speaking at the Business Forum event, the President said India and Vietnam are old civilisational friends, and trade is a driving force of our contemporary partnership. In the past eight years, there has been an almost four-fold increase in bilateral trade, from US$ 3.7 billion in 2010 to US$ 12.8 billion in 2017. With both Vietnam and India on a path of high growth, this trend is expected to continue.

The President said the Vietnam-India business relationship presents prospects for engagement in financial services, IT and the digital economy, hydrocarbons, defence, renewable energy, mining, healthcare, tourism and civil aviation, among other sectors. The President said Vietnam is a very important trading partner for India within ASEAN, and India is now among the 10 largest trading partners of Vietnam. He emphasised that Vietnam-India economic relations have made significant achievements, but a lot more is waiting to happen. He invited Indian and Vietnamese businesses to partner each other for enhanced trade as well as technology and investment collaboration.

Later in the evening, the President addressed an impressive gathering of the Indian community andfriends of India in Vietnam at a reception hosted by Shri P. Harish, Ambassador of India to Vietnam.

Addressing the gathering, the President said the Buddhist Sangha is an important institution promoting friendship between India and Vietnam. He noted that Buddhist monks were as active in nurturing our relations in ancient times as they are today. The President said the Indian community in Vietnam plays a strong role in creating opportunities for the local economy and society. He appreciated the efforts of the Vietnam-India Friendship Association, the Vietnam Union of Friendship Association and the India Studies Departments of Vietnamese universities in working towards a greater understanding of India.

Yesterday afternoon (November 18, 2018), President Kovind began his state visit to Vietnam when he landed in Da Nang. Later in the evening on November 18, he met the local leadership of the Da Nang People’s Committee and attended a banquet in his honour. This morning (November 19, 2018), the President visited the Museum of Cham Sculpture, which has an impressive collection of Cham civilisation sculptures and carvings, including many inspired by Hinduism and Buddhism.

President Kovind also visited the My Son temple complex in Kwangnan province, where the oldest temples have been dated to the fourth century. A UNESCO World Heritage Site, the My Son temple complex is among Vietnam’s most cherished cultural treasures. The ancient temples are being restored with support from the Archaeological Survey of India, and the President was briefed on the restoration project.

2018-11-19
Editor in chief
Previous: PM launches Ease of Doing Business Grand Challenge
Next: Hindi is the language of common people of the country:Kiren Rijiju