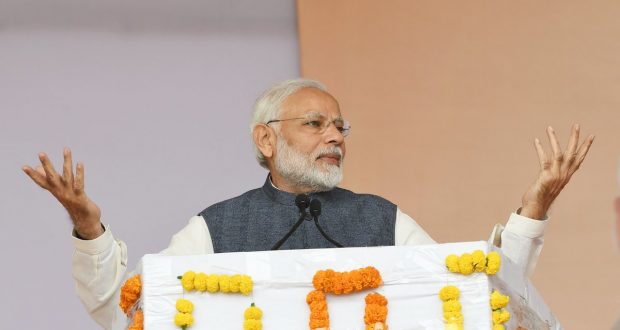 The objective of this challenge is to invite innovative ideas based on Artificial Intelligence, Internet of Things, Big Data Analytics, Blockchain and other cutting edge technology to reform Government processes. The platform for the Grand Challenge is the Startup India Portal.

Addressing the gathering on this occasion, the Prime Minister complimented industry representatives and all others present, for their efforts in improving India’s ranking in “Ease of Doing Business (EoDB).”

He recalled that when he had first articulated his vision for India to break into the Top 50 in EoDB rankings in the years to come, it was greeted with skepticism. He added, however, that a great improvement is now visible in just four years. He said the EoDB rank has improved by 65 spots in this period. He said India now ranks first in South Asia, and is just some steps away from the Top 50 target. He said that the Union and State Governments have both worked together towards improving EoDB, in the spirit of cooperative, competitive federalism.

The Prime Minister said that the Union Government has laid stress on Policy Driven Governance and Predictable Transparent Policies. He said that the reforms being undertaken by the Union Government are also aimed at improving ease of living for the common people. He said, today small entrepreneurs can do business more easily, and simple things like getting an electricity connection have got easier. He said that in the last four years, more than 1400 archaic laws have been repealed. He said dramatic reductions have been achieved in areas such as time taken for resolution of commercial disputes, and time taken for clearing imported goods. He listed a number of other areas, where great improvements have been made. He mentioned the efforts made for the MSME sector, such as approval for loans upto Rs 1 crore in 59 minutes.

The Prime Minister said that organizations such as IMF and Moody’s, today appear confident and optimistic about India’s future. The Prime Minister said that the aim is to make India a 5 trillion dollar economy in the shortest possible time. He said that for this, improvement is necessary in every sector of the economy. He said that the Union Government is also working towards an industrial policy which will be more reflective of current realities, and will be in accordance with the new vision of the entrepreneurs of New India. He exhorted the gathering to work towards achieving the target of a Top 50 position in EoDB rankings.

The Prime Minister said that it is necessary to reduce human intervention in processes, and increase the use of modern and digital technologies. He said that a work culture based on this, will further promote policy driven governance.