Top Headlines
Home » Literature » Hindi is the language of common people of the country:Kiren Rijiju 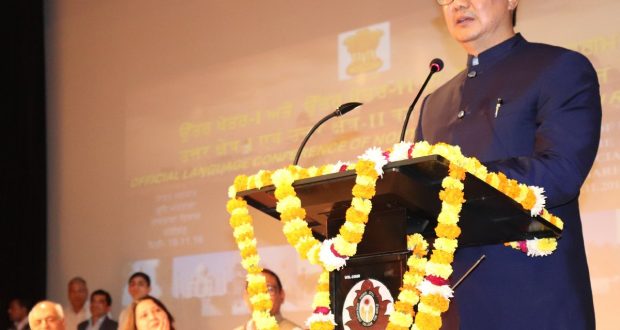 Hindi is the language of common people of the country:Kiren Rijiju

in Literature November 19, 2018 Comments Off on Hindi is the language of common people of the country:Kiren Rijiju 746 Views

Union Minister of State for Home Affairs, Shri Kiren Rijiju was the Chief Guest in the conference. Speaking on the occasion, he said that Hindi is spoken by crores of people in the country. They think and express their ideas in Hindi; Hindi is medium of expression of all the elements of Indian culture and society. We should remember that Hindi is language of common people of the country. He added that Hindi was not only the language of freedom struggle but is also language of social interactions.

Addressing the conference, Dr. Chaman Lal Gupta, Vice President of Indian Institute of Higher Education, Shimla said that the new generation should learn and use Hindi. The Head of Department of Hindi, Panjab University, Chandigarh, Dr. Gurmeet Singh advocated that Hindi should be easy to use; we should not differentiate between literary and working Hindi and that the use of Hindi in field of technology is essential. There must be coordination between translators, teachers, journalists and writers, he added.