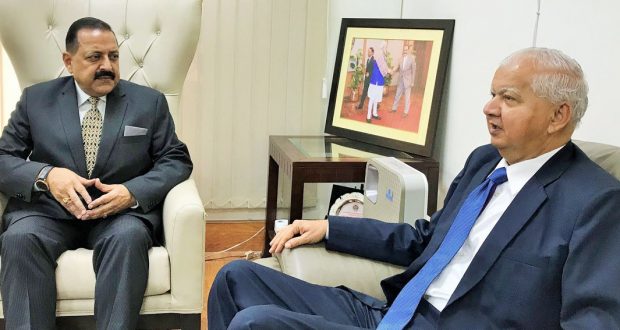 Newdelhi:16/11/18:The Minister for Public Service & Good Governance, Law & Justice, Government of Tanzania (Zanzibar), Mr Haroun Ali Suleiman called on Union Minister of State for Personnel, Dr Jitendra Singh here yesterday and discussed India’s experience with good practices in governance as well as possibilities of exchange programmes at academic level with Lal Bahadur Shastri National Academy of Administration (LBSNAA), Mussoorie and other Indian institutions.Extending a warm welcome to Mr Haroun Suleiman and his delegation, Dr Jitendra Singh recalled that India shared a traditionally friendly relationship with Tanzania right from the time of President Mr Julius Nyerere. Because of these common linkages of legacy, he said, it is far much easier to expect a successful engagement between the two countries.

Dr Jitendra Singh referred to the visit to Tanzania by Prime Minister Shri Narendra Modi in July, 2016 and pointed out the special emphasis given by the Government to the relations with the African countries.

During the half-an-hour interaction, Mr Haroun Suleiman expressed keenness for further and deeper engagement with India in the fields of civil services and governance. He proposed to Dr Jitendra Singh the desirability of arranging visits by civil servants from Tanzania to India, so that they could enrich themselves from the vast experience of the Indian Administrative Service.

Dr Jitendra Singh informed his Tanzanian counterpart that the Union Ministry of  Personnel is already engaged in such exchange programmes with several countries .In response to Mr Suleiman’s request for the visits of Indian faculty to his country, Dr Jitendra Singh said, a group of officers can be assigned to work out this arrangement. For this purpose, he said, the representatives from Ministry of External Affairs will also be involved