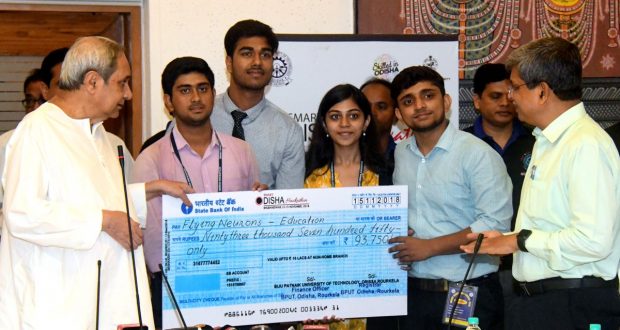 in State News November 16, 2018 Comments Off on Odisha Chief Minister felicitated the hackathon winners and gave away cash awards 812 Views

Bhubaneswar16/11/18:: Chief Minister Naveen Patnaik felicitated the hackathon winners and gave away cash awards at the secretariat here on Thursday.

The 36-hour Hackathon was organised in the College of Engineering & Technology (CET) with the collaboration of Department of Skill Development & Technical Education and Biju Patnaik University of Technology.

Around 4038 students from various colleges and universities across the country participated in this event. A total of 84 teams participated from 12 states. While 45 teams were from Odisha, 35 were from other states.

In each category, Rs 1 lakh, Rs 80,000 and Rs 70,000 have been awarded as the first, second and third prize respectively. Moreover, from each of the eight sectors, the best group from Odisha and outside received a special prize of Rs 75,000 separately.

To encourage women participation in this event, there was an additional 25 percent added to the prize money.

In all India level in agriculture Skividee 10, in housing Blitzkrieg and in healthcare sector Sundaram 27b2-Geohealth respectively got first, second and third prize.

2018-11-16
Editor in chief
Previous: Odisha Chief Minister has flagged off a special train from Titilagarh to Haridwar and Rishikesh
Next: Odisha Assembly Winter Session began with a stormy note: House Adjourned Till Tomorrow