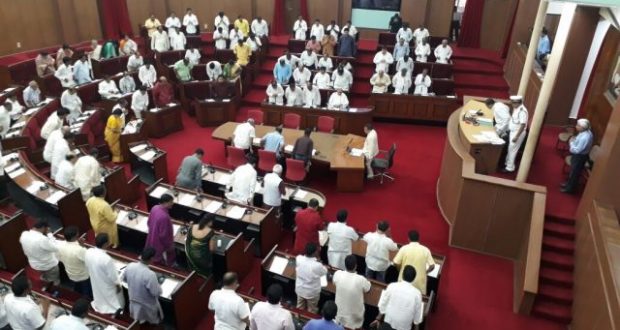 Bhubaneswar:16/11/18: The first day of the Odisha Assembly Winter Session began with a stormy note today. Speaker PK Amat adjourned the house till tomorrow after the Opposition Congress created pandemonium over issues of farmers.

Earlier, Chief Minister Naveen Patnaik moved Obituary References on the passing away of former Members of the House and Martyrs.

At the beginning of Question Hour, Congress legislators rushed to the House well and created uproar over farmer issues. Unable to run the proceedings Speaker Pradip Amat adjourned the House till 12.14 PM and again till Saturday.

When asked, LOP Narasingha Mishra said, “The House Committee probe report on Abhijit Iyer has been submitted.” The probe report is likely to be placed before the House tomorrow, Mishra added.