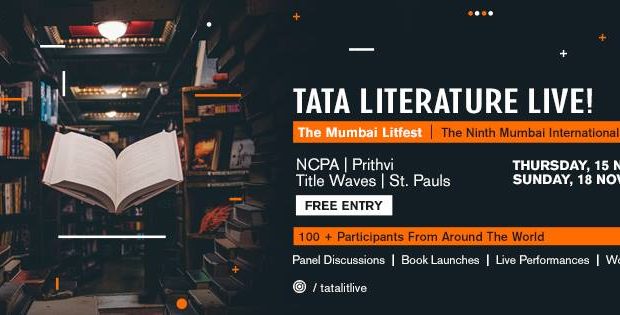 Mumbai:16/11/18:The ninth edition of Mumbai’s very own literature festival Tata Literature Live! begins on 15 November, with promising discussions on fiction-related subjects as well as matters concerning the country in general. This year’s line-up includes several noted writers of literature, such as Robert Dessaix and Alberto Ruy Sánchez, as well as names from the worlds of journalism and culture, such as Molly Crabapple and TM Krishna.

Founder and festival director Anil Dharker spoke of the diverse line-up. “This year, in addition to the literary giants that we always attract to the festival, we have towering personalities and amazing successes in various fields – the performing arts (for example, Stephen Daldry); History and Culture (Neil MacGregor, one of the world’s most reputed cultural historians); civil rights (Aruna Roy and Teesta Setalvad); political philosophy (Pavan Varma and Bhanu Dhamija); authors like Deborah Maggoch, and of course two beloved figures of India who it is our privilege to honour: Jayanta Mahapatra who is this year’s Festival Poet Laureate and Sir Mark Tully, who has been conferred this year’s Lifetime Achievement Award. This mix has made us as much a Festival of ideas as of literature, and I am looking forward to an intellectual feast and four days of really stimulating and educative interactions, not just for me but for all our visitors.”The subjects of the panel discussions range from Hinduism and Hindutva to biodiversity to translation and art and activism. The debate this year will be about whether India needs a presidential system. Attendees can also look forward to sessions featuring journalist Ravish Kumar, RTI champion Aruna Roy and eminent ISRO scientist Nambi Narayanan.

Another prestigious prize at the festival are the Sultan Padamsee Awards for playwrights writing in English, and this year’s contenders are Bettina Gracias, Riti Sachdeva, Shiv Tandan and Sneh Sapru.

With the #MeToo movement unfolding on social media, there has been a focus on gender when it comes to this year’s programming. Executive director Shashi Baliga explains, “This year we have quite a few discussions on various aspects of gender and not just the man-woman relationship. Besides sessions on conduct in the workplace and gendered fiction, we have speakers like David Ebershoff, author of The Danish Girl; the intriguing Eran Hadas who writes post-gender poetry; and Foreign Body, a solo performance about hope and healing after sexual assault.”