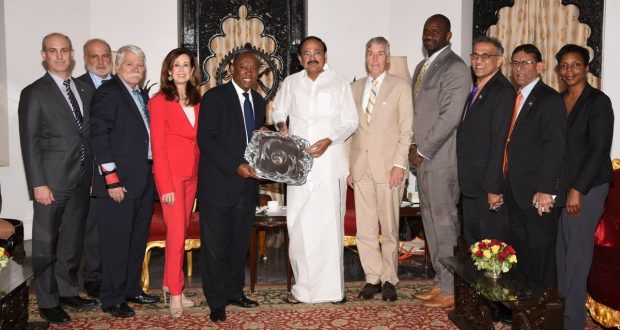 in National November 16, 2018 Comments Off on India is witnessing an Urban Renaissance: Vice President 541 Views

Mumbai16/11/18:The Vice President of India, Shri M. Venkaiah Naidu has said that India is witnessing an urban renaissance and has been set in motion. He was interacting with the Mayor of Houston, USA, Mr. Sylvester Turner, who called on the Vice President along with a high level trade and investment delegation including counselors, city planners, urban development officers and members of the Indo-American Business Chamber, in Mumbai today.

The Vice President said that Government’s initiatives such as Smart Cities, AMRUT Mission, Housing for all are changing the urban landscape by providing amenities to common man at an affordable price. A good beginning has been made and it needs to be taken to its logical conclusion to realize a new and resurgent Urban India, he said. With a new found spirit of confidence and a healthy competition among cities to improve urban amenities and quality of life of citizens, he added.

Shri Naidu said that the ultimate aim of the Government is to recast the urban landscape of our country and to ensure decent living for the rapidly growing urban citizens besides making our cities and towns dynamic engines of economic growth.

The Vice President informed the delegation about the transformative changes brought into governance by the government, and said it empowered state and city governments in respect of project formulation and appraisal under new urban missions in conjunction with capacity building.

The Vice President said that as 70% of our urban population are residing in 500 cities and towns a comprehensive five year action plans for addressing infrastructure deficit in a focused manner are being prepared for the first time to have an affordable and sustainable urban infrastructure that is inclusive in nature.

The Vice President said that 100 such Smart Cities are being built now in India that would act as lighthouses to inspire, motivate and encourage others to build more Smart Cities. He further said that a Smart city is one that is liveable and lovable – a comfortable and happy place for the citizens. Architectural planning of smart cities must have provisions for pedestrian passes, cycle tracks and more greenery, as that will enhance the health of citizens, he added.

The Vice President said that India and United States being the largest and oldest democracies in the world should come together and strengthen the existing relationship to foster new ties.

The Mayor appreciated the reforms that are being implemented in India and was all praise for India’s growth. He said that India is the fastest growing economy in the world. The Mayor expressed interest to further strengthen the existing cooperation with India, in the fields of Education, IT, Health and urban planning, transfer of technologies in various sectors.