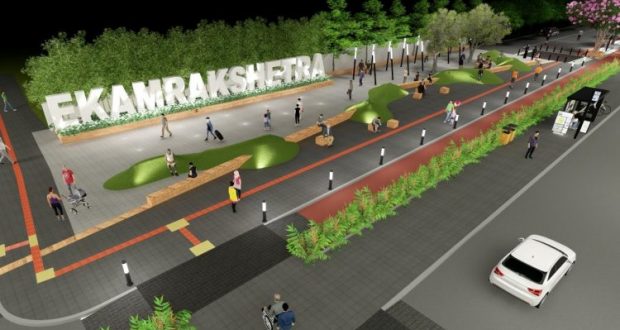 in Smartcity Bhubaneswar November 16, 2018 Comments Off on Ekamra Plazas getting ready to come out tas a major attraction for the city dwellers and visitors to the hisoric city 696 Views

Bhubaneswar:16/11/18: Ekamra Plaza, the gateway to the Old City from the heart of the State Capital, is getting ready to come out as a major attraction for the city dwellers and visitors to the historic city.

The plaza, which would act as a bridging link between the two parts of the Temple City, is part of the 5.8 km-long Smart Janpath Project of the Bhubaneswar Smart City Limited, which comes as a symbol of modern creative design for a liveable city.

Near the Ekamra Plaza citizens can sit and spend their time, just pass time and have a chat with each other. Kids can have a nice time as in future beautiful light arrangements, plants, and flower pots are likely to enhance the ambience of the area.

After some days another point near Master Canteen Square would also have a beautiful line on the similar platform “I Love Bhubaneswar” linking the connection of the young minds and their bonding with the city. All these are going to reflect the creative side of the city’s genesis from an ancient capital city to the modern Smart City in the making.

The Creative City is a concept developed by Australian David Yencken in 1988. Later, the concept has evolved as a pan-world idea incorporating new planning ideas for the city development.Yencken first wrote about his idea of Creative City in his article ‘The Creative City’, which was published in the literary journal Meanjin. In his write-up, he argued that a Creative City must be able to provide better places for the young and creative citizens so that they can work more nicely.