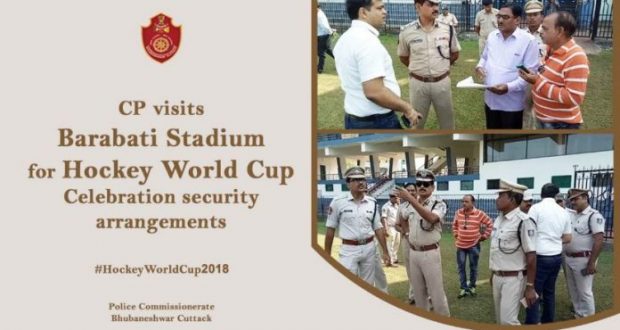 in District Diary November 16, 2018 Comments Off on Commissionerate Police reviewed all the arrangements at Barbati Stadium before A R Rahman perform live on stage 690 Views

Cuttack:16/11/18: A R Rahman will perform live on stage at a concert to be held at Barabati Stadium on November 28 as a part of the Men’s Hockey World Cup celebrations.

To ensure that the event is held without any glitches, the Commissionerate Police and the district administration reviewed all the arrangements at Barbati Stadium on Friday. Commissioner Satyajit Mohanty, Cuttack DCP Akhilesvar Singh and Cuttack Collector Aravind Agarwal reviewed the arrangements.

The programme will coincide with the Bali Yatra. It will be a big challenge for the Commissionerate Police as far security and traffic management is concerned. Rahman’s performance will come a day after the opening ceremony of the Hockey Men’s World Cup at Kalinga Stadium here. Hockey India CEO, Elena Norman has written to Odisha Olympic Association, seeking assistance for making the necessary arrangements for the promotional event at the Barabati Cricket Stadium in Cuttack. She also confirmed that Rahman had given his consent to perform at the promotional event as part of the Odisha Hockey Men’s World Cup 2018.

The famed singer had earlier confirmed that he would be performing live at the opening ceremony of the World Cup at Kalinga Stadium alongside Bollywood superstar Shah Rukh Khan. He has also composed the official song of the quadrennial event, ‘Jai Hind Hind, Jai India’ penned by celebrated lyricist-poet Gulzar.

2018-11-16
Editor in chief
Previous: Odia film’ Love Express’ going to be hit the theater during Newyear 2019
Next: Need of the hour is to prevent endocrine related diseases :Naveen Patnaik