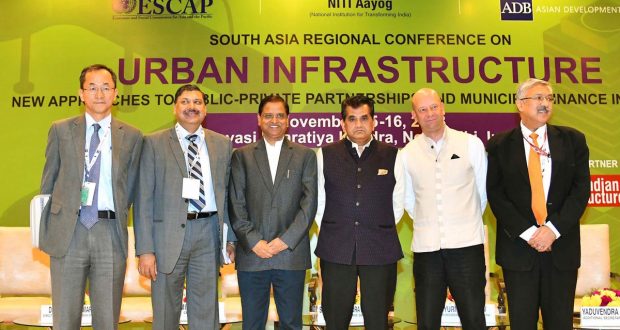 Newdelhi:15/11/18:  NITI Aayog, the premier think tank of the Government of India, partnered with the United Nations Economic and Social Commission for Asia and the Pacific (UNESCAP) and the Asian Development Bank (ADB) to host a South Asian regional conference at PravasiBharatiya Kendra in the capital today to discuss the key issues, perspectives and the way forward in the Urban Infrastructure.

Union Minister of State (Independent Charge) in the Ministry of Housing and Urban Affairs), Shri Hardeep Singh Puri addressed the closing session on Day One of the Conference and received the rapporteurs’ presentations, summarising best practices related to new approaches to PPP & Municipal Financing.

In the inaugural address, CEO NITI Aayog, Amitabh Kant emphasized upon the need to ensure adequate return on investments in infrastructure through properly structured Special Purpose Vehicles (SPVs) and de-risking of projects. He  said that  it is required to evolve unique models and systems of urban planning which are creative, innovative and sustainable, and suited for South Asian countries.

Secretary, Department of Economic Affairs, Ministry of Finance, Subhash Chandra Garg emphasised on the need to decentralised urbanisation, with porous boundaries between urban & rural areas as the key to sustainable urbanisation. He said that the future areas of growth & development are infrastructure & digitalised delivery of goods & services.

Considering the quantum deficit in infrastructure implementation today vis-à-vis the demand, it is extremely imperative to focus on newer means of implementing and financing urban infrastructure. In India alone, until 2040, estimated investments of around $4.5 trillion are required in the infrastructure space. With respect to urban needs, the population in South Asia is expected to grow by around 250 million till 2030, while that in India is expected to reach around 590 million during the same period.

There are an estimated 98 million people who reside in the slums of Indian cities and are disproportionately deprived of access to basic services and infrastructure. These gaps must be addressed, so that the cities grow equitably and in an environmentally responsible way.