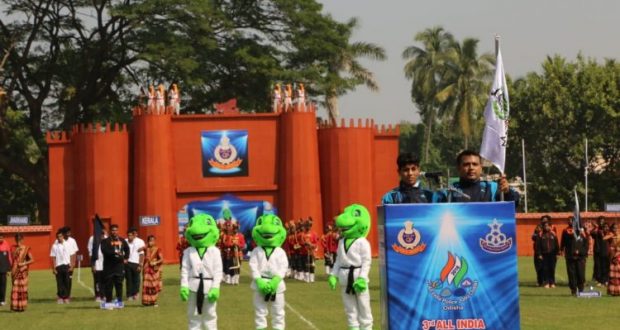 3rd edition of the All India Police Judo Cluster-2018 inaugurated

in Sports November 15, 2018 Comments Off on 3rd edition of the All India Police Judo Cluster-2018 inaugurated 599 Views

Cuttack: 15/11/18:Sports and Youth Services Minister Chandra Sarathi Behera today inaugurated the 3rd edition of the All India Police Judo Cluster-2018 at the Reserve Police Ground in Buxibazar in Cuttack.

Since this tournament is being organised for the first time by Odisha Police, Behera welcomed all the participants and team managers in his speech at the event.

Behera also suggested Odisha Police and DGP RP Sharma to host the All India Police Athletic Championship in future days and assured all kind of support from the State Government.

According to reports, as many as 1200 players and 300 officials and trainers from 33 teams, consisting of Central Para Military Forces and State Police Organisations will participate in this mega sporting event.

These teams will compete in four events, namely, Judo, Gymnastics, Taekwondo, and Wushu. The championship will be organised under the guidance of ‘All India Police Sports Control Board’.

The Mascot for the Asian Athletics Championship and World Cup Hockey ‘Olly’ has also been taken as the Mascot of this event as well. Olly is Odisha’s endangered species of Olive Ridley Turtle.

Prominent among others, DGP RP Sharma, Chairman of the Organising Committee and ADGP VT Mishra, Organising Secretary of the championship were present at the inauguration ceremony.

2018-11-15
Editor in chief
Previous: IIT Kanpur working on project for reconstructing the Ganga of the past using Corona Archival imagery
Next: Odisha Chief Minister distributed land records to slum dwellers under the Jaga Mission