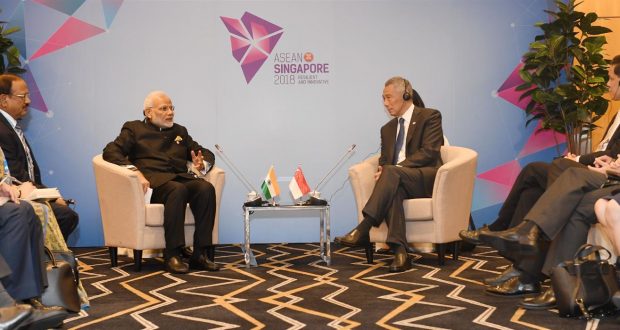 in International November 14, 2018 Comments Off on Financial inclusion has become a reality for 1.3 billion Indians: Narendra Modi 585 Views

Singapore:14/11/18: Prime Minister Narendra Modi said on Wednesday that financial inclusion has become a reality for 1.3 billion Indians as he pitched India as a favourite destination for investment at the Fintech Festival here.

Modi became the first world leader to address the festival which was launched in 2016 and is in its third edition. “Financial inclusion has become reality for 1.3 billion Indians. We have generated more than 1.2 billion biometric identities- Aadhaar or foundation- in just a few years,” Modi said at the event. The Singapore Fintech Festival (SFF) is already the world’s largest event on financial technology – or fintech. In 2017, the event drew as many as 30,000 participants from over 100 countries.

The SFF involves a three-day conference, and exhibition of FinTech firms and capabilities, a global competition of FinTech solutions and a platform for matching entrepreneurs and investment capital. Modi said through Aadhaar and cellphones, his government has launched Jan Dhan Yojana and opened 330 million new bank accounts in three years.

“These are 330 million sources of identity, dignity and opportunities. Less than 50 per cent of Indian had bank accounts in 2014. Now, it is nearly universal. So today, more than a billion biometric identities, more than a billion bank accounts and more than a billion cell phones give India by far the biggest public infrastructure in the world,” Modi said. “We are in an age of a historic transition brought about by technology. From desktop to cloud, from Internet to social media, from IT Services to Internet of Things, we have come a long way in short time,” he said.

2018-11-14
Editor in chief
Previous: MoU signed on India-UK Cancer Research Initiative for Affordable Approaches to Cancer.
Next: Odisha Pavilion in 38th edition of IITF-2018 at Pragati Maidan was inaugurated