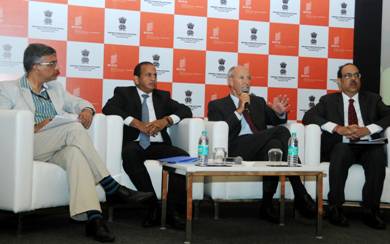 NEWDELHI;14/11/18: The Department of Industrial Policy and Promotion (DIPP), Ministry of Commerce and Industry, is hosting a conference on Global Digital Content Market (GDCM)2018, on 14th– 15thNovember 2018, in New Delhi.The conference will feature sessions on music, film, broadcasting and publishing, as well as collective management, emerging models and the implications for the market and policy makers.

India has been chosen as a host nation for the conference byWorld Intellectual Property Organization(WIPO) due to the strong creative industry in the country in films, music and media. The focus for this year’s conference is the Asia Pacific region. The GDCM 2018 will see participation of professionals from various creative fields, the digital industry around the world and delegates of the diplomatic community from Missions to the United Nations.

The aim of GDCM 2018 is to give industry stakeholders a platform to come together and discuss new avenues in the films, music, gaming and creative industry along with points of challenge that is presented due to thechanging creative landscape because of the disruption brought about by digital technologies.It is hoped that through the GDCM 2018 an exchange of knowledge, culture and good practices amongst the nations of the Asia Pacific region will take place.GDCM is a platform to discuss vital issues and enhance development of the digital and IP generating industries such as publishing, films, music, and gaming all of which are major contributors to the Indian GDP. The presence of key stakeholders from India in GDCM will place it on the global digital stage.

GDCM 2018 is the second edition of the conference.The first conference was held in Geneva 2016. Speaking at a press conference today in New Delhi, Mr. Francis Gurry, the Director General of World Intellectual Property Organization (WIPO), Geneva, said that the aim of WIPO is to ensure that a creative artist continues to be protected and receives better remuneration on the digital platform. He appreciated India’s efforts of integration with international systems through the National IPR policy 2016 under which the Government of India has taken efforts for creating an environment in the country that is conducive for the generation of Intellectual Property Rights (IPRs) by increasingawareness among the citizens on the subject and strengthening IPR enforcementmechanisms.

Secretary DIPP, Ramesh Abhishek, informed in the press conference that India’s rank in the Global Innovation Index 2018 has improved by 24 places from that of 2015 and now ranks 57th. India is the top-ranked economy in Central and Southern Asia and has now outperformed on innovation relative to its GDP per capita for seven years in a row.

Secretary DIPP further stated that to better equip the enforcement agencies to deal with IP related crimes 33 enforcement training programmes have already been conducted in 9 states in order to train police, customs and the judiciary for tackling cases on IP. Government has also pulled down 80 rogue websites to combat online piracy. India has recently approvedaccession to the WIPO Copyright Treaty (WCT) and WIPO Performances and Phonograms Treaty (WPPT) that has increased the coverage of protection of copyrights in the international IP regime as it is extended to even the internet and digital environment. This will bring the Indian creative industry under and international copyright system, secure distribution of their work and provide them with a level playing field.

Secretary DIPP also informed that large scale augmentation of man power of Indian IP offices has been done which has brought down pendency of IP applications. Trademark registration has increased by leaps and bounds and patent applications have quadrupled in 2017-18 as compared to 2015-16. These efforts are being made to ensure that the country moves towards realizing the goals of Creative India; Innovative India.

2018-11-14
Editor in chief
Previous: D. V. Sadananda Gowda assigned the charge of the Ministry of Chemicals & Fertilizers
Next: Investment proposals worth Rs 4.19 lakh crore was received in the second edition of Make in Odisha Conclave