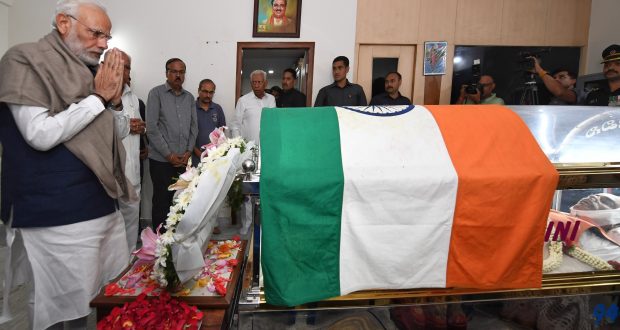 Union Minister Ananth Kumar to be cremated with state honours

in National November 13, 2018 Comments Off on Union Minister Ananth Kumar to be cremated with state honours 802 Views

Prime Minister Narendra Modi flew in here from Varanasi and drove straight to the residence of Kumar at Basavanagudi and paid homage to his colleague by placing a wreath on his mortal remains, on Monday night.PM Modi consoled Kumar’s wife Tejaswini and his two daughters during his 15-minute visit.

BJP leaders and those from various political parties, relatives, family friends, party workers and people made a beeline at Kumar’s residence to pay homage to the “most-loved” Bengaluru MP, known for his affability and cordial ties with rivals.

The Karnataka government had declared a three-day state mourning. Foraying into politics in 1987, Kumar became Union minister in the Vajpayee cabinet in 1998 when he was only 38. He remained in the inner circle of the central leadership of the BJP — be it during the heyday of Atal Bihari Vajpayee or Narendra Modi now. He served as an important link between the central and state units of the party.

Teaming up with Yeddyurappa, Kumar was among the few party leaders who could be credited for the growth of the BJP in Karnataka, bringing it to power in 2008 and making it the first saffron party government in the South.Kumar made his parliamentary debut in 1996 from Bangalore South, where he remained unconquered till his death. He had defeated software icon Congress’s Nandan Nilekani in the highly politically conscious constituency in the 2014 Lok Sabha polls.

2018-11-13
Editor in chief
Previous: Morocco & India agree to assist in Legal & Commercial Matters
Next: Investment opportunities in Textiles, MSME, and health sectors were focused on the third day of the Make In Odisha Conclave