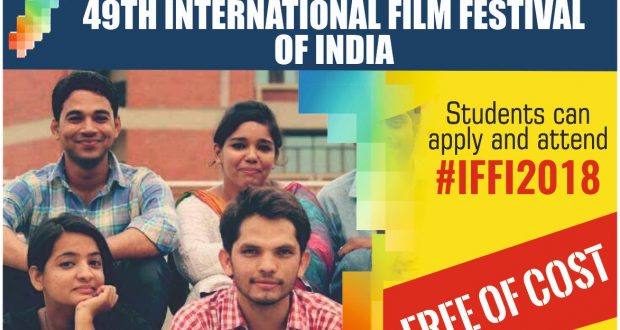 Students Can Now Enjoy IFFI 2018 At No Cost | Registrations Open

in Entertainment November 13, 2018 Comments Off on Students Can Now Enjoy IFFI 2018 At No Cost | Registrations Open 755 Views

Newdelhi:13/11/18:Be it Music festivals or other social gatherings, the month of November is always buzzing with activity and it has something in store for everyone. But the one thing that gets people from across the country and the world to Goa, is the International Film Festival of India (IFFI) in Goa. The 9-day film festival sees a large number of films and even World Premieres that are attended by Stars from different countries. And the best news for students is that they can enjoy all this for Free!

Yes! That’s right Students of Film and Mass Communication from recognized institutions of India can very much apply and attend IFFI 2018, FREE OF COST. This is a move that aims to foster and nurture the love for movies and cinema among the youth of the nation. The film industry in India is an extensive one and it covers not just Bollywood, but also the talent filled industries from different states of India that include films in vernacular languages.

So how exactly can you register for free for IFFI 2018?

One, you will need to be a Student of any Film or Mass Communication Institute that is recognized.

Two, you will need a letter from the head of your institute or a bonafide certificate from the same.

Last but not the least, You should also be 18 years old or more at the time of registration.

There is no amount that has to be paid while registering, as it is free for Students who fulfill the eligibility criteria above. Registered Student Delegates will receive the same benefits as the regular delegates, such as Access to Workshops & Master-Classes, Access to Film Screenings, Free WiFi, Delegate Kit, Online Ticket Booking which allows a person to watch 3 movies a day.

The 49th Edition of the International Film Festival of India will be held in Panjim, Goa from the 20th to the 28th of November. The festival is the first film festival of Asia and has seen many renowned Film Personalities from around the Globe grace the event.  IFFI 2018 is open to everyone above 18 years of age.