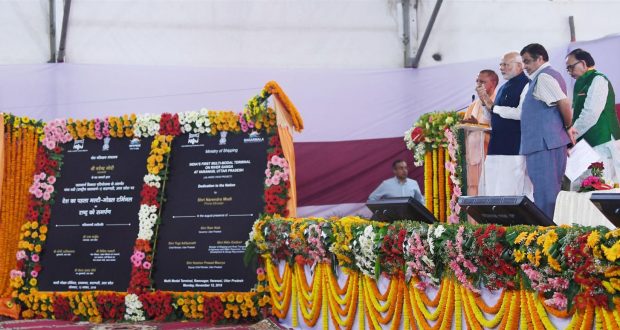 in National November 13, 2018 Comments Off on PM in Varanasi: Dedicates Multimodal Terminal to the nation; Inaugurates major road projects 474 Views

Varanasi:13/11/18:Prime Minister Narendra Modi  dedicated the Multimodal Terminal on the River Ganga, to the nation, and received the first container cargo. He inaugurated the Varanasi Ring Road Phase 1, and the development and construction for four laning of Babatpur-Varanasi Section of NH-56. He also inaugurated and laid the Foundation Stone for various other development projects in Varanasi.

Addressing a large and enthusiastic gathering on the occasion, the Prime Minister said that the day is historic, for Kashi, for Poorvanchal, for Eastern India, and for the whole of India. He said that the development work that has happened today, should have been completed decades ago. He said that along with Varanasi, the entire country is now witness to how, the vision of Next Gen Infrastructure can transform the means of transport.

Referring to the arrival of the first inland container vessel in Varanasi, the Prime Minister said that Eastern Uttar Pradesh is now connected with the Bay of Bengal, through the water route.He mentioned the various other projects, including roads, and projects related to Namaami Gange, which were inaugurated, or for which the foundation stone was laid today.

The Prime Minister said that the inland water-way would save time and money, reduce congestion on roads, reduce the cost of fuel, and reduce vehicular pollution.He said the road connecting Babatpur Airport with Varanasi was becoming an attraction for tourists, besides facilitating travel.

The Prime Minister said that modern infrastructure has been built at a rapid pace in the last four years. He said that airports in remote areas, rail connectivity in parts of the North East, rural roads and highways have become a part of the Union Government’s identity.

The Prime Minister said that projects worth Rs. 23,000 crore have been approved under Namaami Gange so far. He said almost all villages along the banks of the River Ganga have now become open defecation free. He said these projects are part of the Union Government’s commitment to cleaning the River Ganga.

2018-11-13
Editor in chief
Previous: Jindal Steel and Power Ltd would increase its investment in Odisha from Rs 45,000 crore to Rs 1 lakh crore by 2030
Next: Prime Minister interacts with the members of his Science, Technology and Innovation Advisory Council